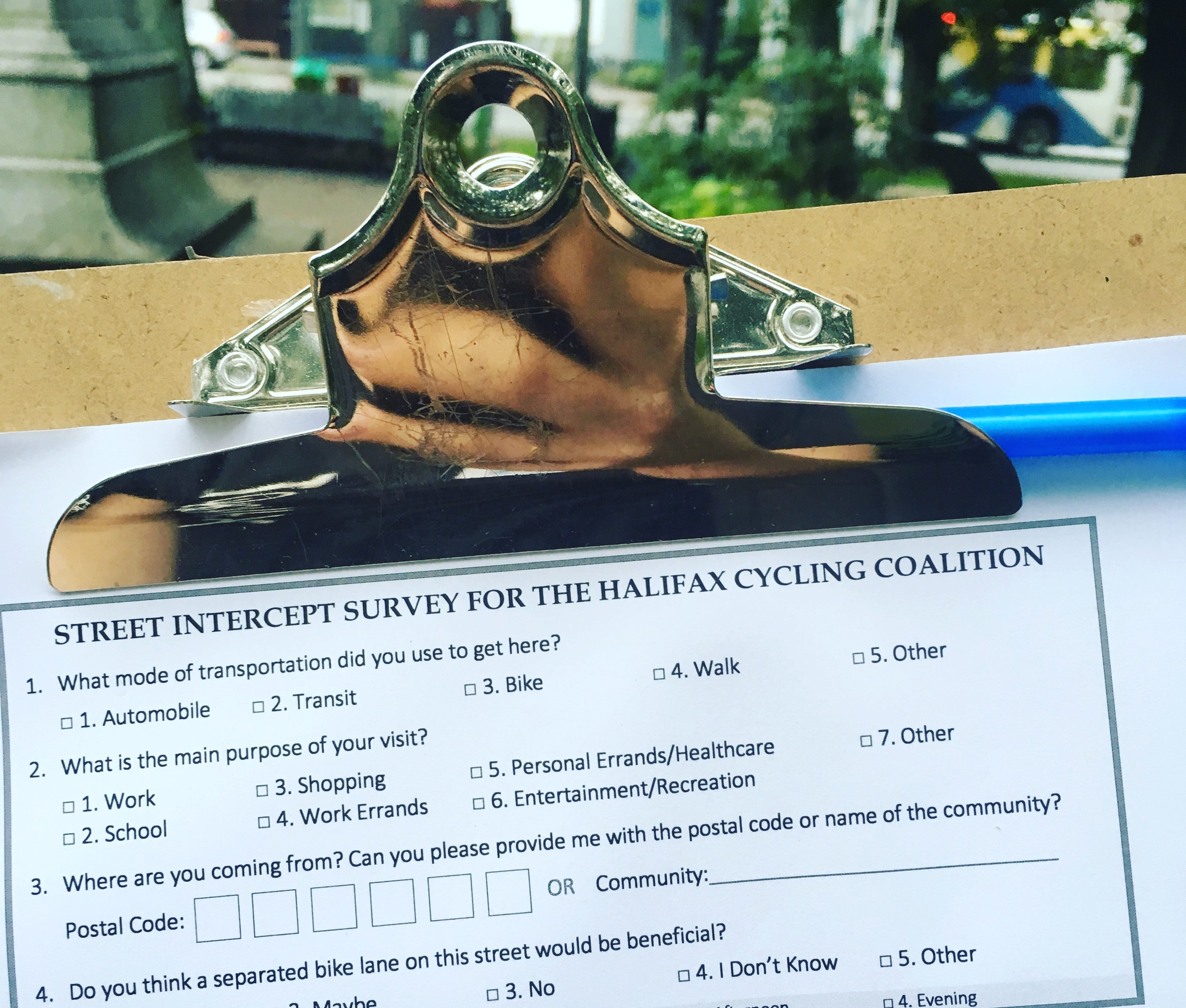 We believe in the power of data. Our work is driven by best practices, studies, and learning from around the world about the impact of cycling on cities. This page contains various research conducted by the Halifax Cycling Coalition, including student reports, internal research, briefing documents, and more.

More than 20 volunteers helped to collect more than 900 survey responses. The survey was designed in partnership with the Dalhousie Transportation Collaboratory (Dal TRAC).

We conducted the intercept survey in 2018, before a new curb-protected bike lane was installed in 2019. We intend to replicate the survey now that the protected bike lane has been installed to see if there is a difference in how many people are arriving at South Park Street by bicycle.

In June 2018, the Nova Scotia Health Authority published a study titled Establishing a Baseline: Active Transportation and Health Indicators in the Halifax Region. At the beginning of the report, Nova Scotia’s Medical Officer of Health, Dr. Trevor Arnason is quoted as saying:

“Finding ways to identify AT specific indicators and to track and measure progress is essential to encouraging long-term and smart investment in AT.”

The HCC played a role in the Establishing a Baseline research by being a member of the Active Transportation and Health Indicators Working Group and providing data for the report.

The Halifax Cycling Coalition has several Eco-Counters located throughout the Halifax peninsula, usually on streets where protected bike lanes or local street bikeways are proposed in HRM’s Integrated Mobility Plan. Eco-Counters are devices that connect to tubes that are laid in the street, which count each bicycle that passes over the tubes. The data is made publically available on a website and the daily totals are tweeted at @bikehfxstats on Twitter. We are currently gathering baseline data, with the intention of counting the number of people riding bikes on key streets after protected bike lanes have been implemented.

Travis Fong completed the following research on bicycle share during the summer of 2015 as part of his Bachelor of Environmental Science and Sustainability at Dalhousie University. He concluded that the bicycle share would attract 1,500 annual members and 6,000 day users, and would require a capital investment of $1,500,000 and an ongoing operational subsidy of $86,000 per year. Click here to view the full report.

In January 2015 we released our landmark On Track for 2020 research. This report outlined the potential for protected bicycle lanes on the Halifax Peninsula and in Downtown Dartmouth, outlining a pilot network of 37km of protected bicycle lanes costing $1,500,000, and calls for the city to add 63km of traffic-calmed residential streets. Download a copy now. Many of the HCC’s recommendations from On Track 2020 have been incorporated into HRM’s Integrated Mobility Plan, also known as the IMP. The IMP calls for a minimum grid of bike lanes and traffic-calmed residential streets to be implemented by 2022.

Researchers at Simon Fraser University have been studying the impacts of bicycle infrastructure in three mid-sized Canadian cities; Victoria, Kelowna, and Halifax. The project is being conducted between 2016 and 2022 and some results are already in. From this research, we know that the presence of connected bicycle routes (or lack thereof) was the #1 factor when deciding to ride (or not) for 60% of Haligonians. This finding demonstrates how critical it is for us to implement the minimum grid of AAA bike routes in Halifax.