HCC’s Priorities for the 2021 Provincial Election 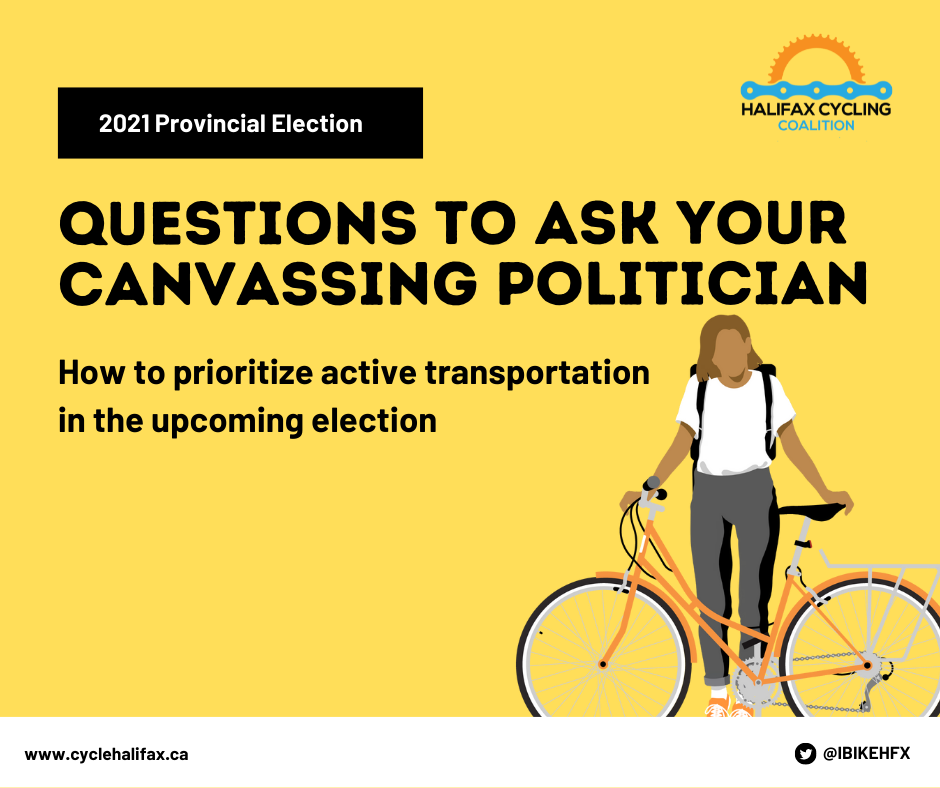 Will you support changes to the Traffic Safety Act to empower municipalities to lower speed limits below the default 50km/hr?

In the current Act, municipalities do not have authority to decrease the default speed limit below 50km/h, and 30km/hr school zone limits only apply when a child is present. We believe municipalities should be empowered to protect the vulnerable road users within them.

We believe our government should work to overcoming the policy and infrastructure disparities that can make active transportation safer and more convenient for some than for others. We believe cycling can be a tool for making our city more equitable when cycling infrastructure is accessible and infrastructure funding is allocated through an equity lens.

Will you commit to increasing investments to support cycling as a transportation option in all parts of the province?

Cycling for transportation is an important strategy to address climate change, but it has often been overlooked. As we are facing a climate crisis, we need to invest in transportation projects that are sustainable while also divesting from infrastructure that is harmful to the environment.

Studies show that 25% of all greenhouse gas emissions are related to transportation. It’s estimated that a major increase in cycling could cut CO2 emissions from urban passenger transport by nearly 11%. According to the 2020 Declaration for Resilience in Canadian Cities, we have a “once in a lifetime responsibility” to start embracing a “greener, cleaner, decarbonized economy” as the new normal.

We believe cycling must play a critical role in the province’s response to the climate crisis, as well as reducing our province’s dependence on fossil fuels.

Will you support removing the mandatory helmet law in the rewriting of the Traffic Safety Act?

We believe protecting people cycling from collisions through safe infrastructure and encouraging more people to cycle are proven road safety practices which protect all people cycling. Helmets do not prevent collisions, and people wearing helmets while cycling can still be hit by people driving cars, making them vulnerable to injury and death.

More importantly, mandatory helmet laws for people of all ages put undue burdens on people from marginalized groups. Helmets can be costly, with a typical helmet costing $80-$120, and they need to be replaced every five years or so because the materials breakdown and become less effective. One of the benefits of cycling is the ease and affordability of doing so as a means of transportation. For people with low-incomes or accessing income assistance, paying for a helmet may not be in the budget. Therefore, they are forced to use more costly forms of transportation or risk being fined for cycling without a helmet. This puts an additional burden on someone who cannot afford to pay the fine.

Studies show that mandatory helmet laws present an additional barrier to people cycling, and can further criminalize populations already at risk of over-policing. For example, one study in Minneapolis showed higher rates of official incident reports and citations filed against Black cyclists in comparison to white cyclists in Minneapolis, New York City and Tampa.

In Halifax, 18.4% of street checks carried out from 2006 to 2017 involved Black people, while Black people only make up 3.7% of Halifax’s population. This evidence points towards Black people being targeted by enforcement officers at higher rates than people of other ethnicities. Due to the fact that the mandatory helmet law for people of all ages disproportionately negatively impacts people struggling with poverty and people who are Black, Indigenous, or People of Color, the law creates deeper inequities in our province.

We believe safety is vital for everyone, but it can’t fully be achieved without equity considerations.

To learn more about this law, you can read HCC’s 2021 recommendations to the Traffic Safety Act

Will you work to ensure the Traffic Safety Act includes HCC’s previous recommendations?

The HCC has recommended that the TSA be grounded in a hierarchy of responsibility, where the safety needs of the most vulnerable road users are prioritized. Following this hierarchy, we also recommend changes to the TSA, including:

You can read more about our detailed recommendations at cyclehalifax.ca/campaigns/amend-the-mva/

Will you support policies that incentivize and promote e-bikes and electric and human-powered cycles?

Earlier this year, the government introduced a $500 rebate on e-bike purchases over $1200, but even with this rebate e-bikes are still extremely costly and therefore inaccessible to many Nova Scotians. Would you extend and/or expand this rebate?

Let’s keep the momentum going and push for cycling as a priority in this election. Click here to find a list of your local nominated candidates.

Please find the full party responses to our questions below: