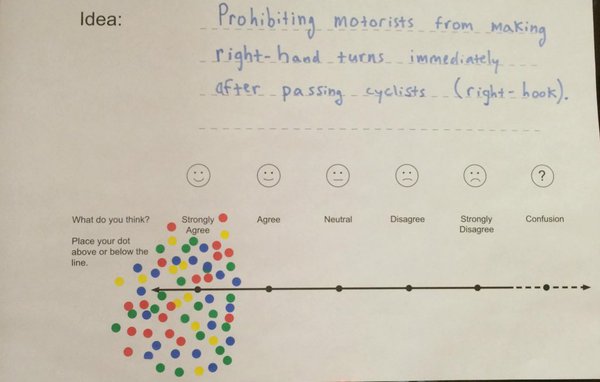 Dooring is the name given to the distracted practice of opening a motor vehicle door into the path of a commuting cyclist. Cute right? and the penalty? “Don’t worry about it. You can get a new bike.” Dooring is one of many cyclist/driver interactions that the Motor Vehicle Act does not address clearly. This is because the Motor Vehicle Act was not written with active transportation users in mind. The Motor Vehicle Act requires amendments to protect vulnerable road users and make the roads work with and not against active transportation users. We are tilling new fields for safe cycling in Halifax and we need your help to replace it with a new Road Safety Act. 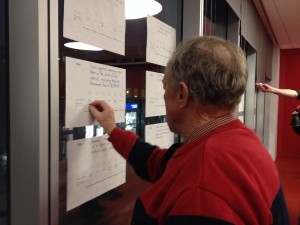 A supporter places a dot on one of the proposals

Halifax Cycling Coalition and our partners hosted a public engagement on January 21st. Together with Walk ‘n’ Roll HFX, Bicycle Nova Scotia, the Ecology Action Centre, and It’s More Than Buses, we generated nearly 40 proposals to consider in a Road Safety Act. Our proposed amendments for the Act were presented to the public on posted sheets that contained an opinion scale. The scales had varied metrics that included the range values: strongly agree, neutral and disagree. Visitors to the session were given dot stickers to place on the opinion scales below each proposed amendment. The goal was to identify the proposed amendments the public saw value in and supported strongly. 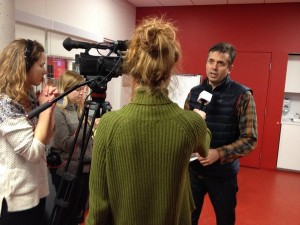 Over seventy five people participated in the engagement process, with another 148 chiming in online. Couples, young families, and solo attendees, helmets in hand, chatted and laughed as they peeled their stickers and placed them on our posters. Paul Calderhead, HCC board member, and Chris Donahoe, HCC member, led this research project and were on hand to speak to the public and local media outlets. MLA Joachim Stroink of Halifax-Chebucto, a recreational longboarder known for skating to the office, welcomed visitors and joined in on the fun.

The Right Hook, a situation in which a motor vehicle passes a cyclist and makes a right hand turn into the same cyclist, is an issue Halifax Cycling Coalition would like the Motor Vehicle Act to prohibit. There was no variation in public opinion on this issue. Each visitor to the engagement placed their sticker in the strongly agree zone of the scale. Public response to the remaining proposals were varied. Click here to see the full results of the in-person and online responses. Having identified the strong public support for a Right Hook amendment, Halifax Cycling Coalition brought it to our meeting with the Provincial Government.

Next steps for the Road Safety Act

In early February, we met with officials from the Provincial Government to share initial feedback. This was our first step towards engaging the entire province in the Motor Vehicle Act amendment process. As these proposals move from public forum to law of the land, Halifax Cycling Coalition will continue to provide opportunities for broad public engagement to shape the rules of our roads. Helps us make Halifax a champion for safe cycling by subscribing to our free e-newsletter. You will receive local bicycle news items, an invitation to future public engagements and updates on our safety campaigns progress.