An information session to collect public feedback on three plans to expand the Mainland Linear Trail system was held at the Canada Games Centre on Wednesday, October 7th. David MacIsaac, a Transportation Demand Management Program Supervisor with the city of Halifax, and Mike Connors, a Project Infrastructure Engineer with WSP Canada, were available to guide participants in the use of four types of interactive public input stations.

There are three Mainland Linear Trail expansion options in the planning stage.

The second option is a Kearney Lake Road Connection. This plan will connect the terminus of the Mainland Linear Trail on Parkland Drive to The Waterline trail by crossing Kearney Lake Road. Obstacles to overcome include steep grades and property line constraints. Parkland Drive is wide enough to accommodate an on-street or an off-street Active Transportation Facility. This is a piece of infrastructure that is at the top of the public’s wish list and could include a public washroom, a water fountain, and bicycle storage.

The third option is a Chain of Lakes AT Greenway Connection.  This plan will connect the Mainland Linear Trail to The Chain of Lakes Trail via a grade-separated crossing. This pedestrian bridge will cross Highway 102 above the Northwest Arm Drive on-ramp/off-ramp in Fairview. There is an existing proposal to widen the Highway 102. This will require the pedestrian bridge be designed to expand with the highway. The new connector trail will then run off-street, parallel to Northwest Arm Drive and connect to The Chain of Lakes Trail near the Halifax water reservoir. This plan will connect the new sub-division of Mount Royale to the Active Transportation network.

Interactive public input stations were neatly placed against the exterior walls of The Canada Game Centers’ Community Room. The public chatted purposefully as they circulated, enjoying the satellite rendering of each expansion option on poster boards. The first input station was a printed map of the Mainland Linear Trail and adjacent residences. Mike Connors handed out stickers to be placed on the map to identify where the public accessed the trail and their place of residence. He was interested in identifying the busiest access points to the Mainland Linear Trail. This will help determine which access points will receive improvement. 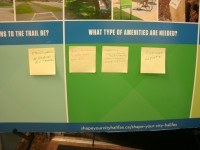 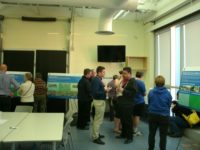 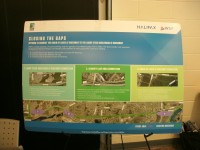 The second input station was a poster board on which sticky notes of suggestion and request for improvement were to be stuck. The board listed points of benefit and obstacle to complete each new connector trail. Three early sticky notes requested a traffic-controlled crosswalk on Main Avenue at the trail crossing, a system of water fountains located incrementally along the trail and additional lighting for the evening.

The third input station was a visual voting station. Empty glass vases labeled with improvements including landscaping, lighting, water fountains, and bathrooms rested on a table. A freezer bag of tinted blocks was given to each participant. Participants then voted for improvements by placing their blocks inside a vase. Blocks could be divided between multiple vases or placed within a single vase for maximum impact. The final two vases were respectively labeled gravel and paved. The public could place one additional block in one of these two vases. Gravel was the favorite, the vase filled to overflow with tinted blocks. I was informed that gravel trails are the easiest on walker and runner’s knees and therefore the most popular surface option for both activities. The Chain of Lakes Trail is currently paved with asphalt and divided by a painted yellow line. This was a fun station that provided an immediate look at the amenity priorities of participants.

The final input station allowed members of the public to write a more detailed comment on a Shape Your City survey card. The survey cards were collected in a box, to be reviewed by the design team after the public session had concluded.