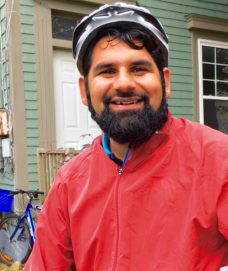 The days are getting colder and the first flakes of snow signal a cold season ahead. For some of us, that means we ride less, or put away the bike altogether. But for Sulaye, biking remains a part of his everyday life all winter long.  We caught up with this HCC member to chat about biking on a chili day outside of Lion & Bright on Agricola Street. When the coffee shop was too busy to snatch a table, he invited us to his cozy North-End home for a cup of tea. A bit of a Winter Warrior, Sulaye is no stranger to biking in the cold.  He has lived in Winnepeg, Fredericton, and now calls Halifax his home where he is a  clinical psychologist candidate register. 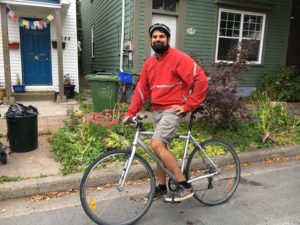 HCC: I hear you have experience biking in a few different winter cities. How do they compare?

So I started biking in Fredericton, because, well, that’s where I am from originally. I always biked here and there as a kid. You know, you just grab your bike and go.

I started biking sort of as a commuter when I was sixteen, you know, because my parents were really bad at picking me up on time. They were late driving me places all the time, you know? I used to be a lifeguard so you would be stuck at work with the keys to the pool, and a bunch of little kids saying “can we get back in?”  So at around 15, 16, you know, I just stated biking home. My parents were always like “be careful on your bicycle” but, you know… I was biking in the summers and started gradually doing that, and then the more I did that, the more I started, kind of, experimenting and going further and further.

HCC: And then you moved away?

Yes, and then I moved to Winnipeg, where I didn’t have a car for a little while. So it was either bike or bus. And the bus can get a little sketchy around there sometimes. There were always incidents, and things happening… So I brought out my nice mountain bike and was like “alright, lets do this”. But, you know it was Winnipeg, so it would get very cold.  I would dawn out a balaclava and a winter jacket. And nobody would mess with you on the road! If you shoulder-check a car with a balaclava on, they move over [laughs]. There is no 1-meter rule needed, especially in the North End of Winnipeg… It was a rough neighbourhood. Like ok, everyone was going to give you a lot of space! They are not messing with you! Which I thought was quite funny.

HCC: Did you see other people biking when it was cold, or were you alone on the streets?

Everybody biked in those communities. I served very underprivileged communities while I was there and everybody was biking. And everybody was biking down major streets. It was tough, like, all the bike routes go into nice urban areas with people who will advocate for them. People will say, well, I don’t want my child biking in…like you know… they will go into silly places, like residential neighbourhoods, you know? But maybe there should be one going down a main street in the middle of the North end [of Winnipeg], or in more disadvantaged areas. Because you will see kids biking on main streets there, and that is their only way to get around.

HCC: Of the cities you’ve lived in Winnipeg, Fredericton and Halifax, what was your favourite to bike in? 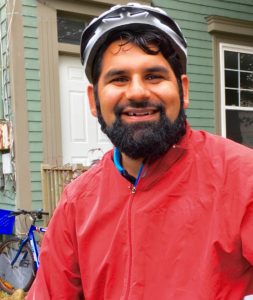 I mean, yea. Like there was one along Pembina Highway, there was one around Sherbrook Street, and there’s a couple others just spread around…. They had these, like, plastic poles. And I don’t know… there was some kind of feeling of safety…Like, I don’t know why, but the cars wouldn’t crash into the plastic poles. They were very simple. It’s kinda of funny. In fact, I actually saw kids with not much to do kicking over the poles [laughs]. But still! The cars would respect the plastic poles even after they were on the ground.

Cars are like sheep. You need to give them a little bit of direction and they will do what you want them to do. You take the lane and say ‘Hey! You’re going around me!’ and make some pointing gestures and eventually they will do that. They are basically sheep. Especially in Halifax they are so nice but they don’t know what they are doing. So you literally have to say “Stop!” “I am going this way!” And make weird hand signals, use your voice, all that.

HCC: Do you have any tips for people riding in the cold?

Compared to Winnipeg, Halifax doesn’t get too bad. I mean, personally I love my balaclava. I used to do ski goggles and a hat. But it didn’t really fit right. I found they fogged up. So I like just doing a balaclava. That just gives you a space for your eyes, and everything else is covered. I actually also really like the full suits that you see at hockey games or with Blue Man Group! I love those because you don’t get as much wind biting at you. No worries about pants riding down or the wind, like, nipping away at any part of your body, it’s all covered! You can also get some nice neoprene gloves and big socks to make sure everything is warm.

HCC: Did you ever bike to work in the winter?

Oh, yea. All the time. But if you are a professional, eventually, you will have to get a drawer at work. You arrive 15 minutes early, you have all your dress clothes there and neatly pressed, and then at the end of the week you just empty it. And if you can negotiate for 2 drawers you just put all your commuting clothes those in there.

HCC: And you found employers didn’t give you heck for showing up in a snow suit?

At that time, I was being graded as well as being employed, and part of your grade was on your image. So, you know… I would have known if someone had issue with it. But it didn’t effect my grade because I kind of proved that, you know, I can look professional even though I walk in with full-on snow gear on. I find as long as you say, ‘hey, I’m going to be in professional clothes within, like, 15 minutes of arriving’, employers are ok with it. It just takes advocating for yourself. And to say look, after this point I will look like everyone else, it won’t be a problem. You just have to give me that little bit of time to grab my clothes, change, and voila!

HCC: You are studying clinical psychology. Do you see a link between physical activity and mental health?

Well of course, that’s the oldest tale in the book. Physical activity improves your mental health, in all different shapes and forms. I mean, it is the first thing as a therapist we tell people to do. Do behavioral activation and get out, get active. Do something that you are good at. And usually picking up a bike, especially in a safe area… you can feel a real sense of accomplishment with a bike.

The one key thing about physical activity that’s important- you have to make it easy. You make it so that doing the physical activity is actually easier than doing the non-physical activity. Like if you choose a gym in Dartmouth but you live in the middle of Halifax, you’re going to be a lot more tempted not to go. And if you choose to only bike recreationally, you are probably not going to bike as much. But, if you bring your bike to work, then you get exercise without as much thought.

How did you get involved with HCC?

I got involved with HCC because I was involved with a cycling group in Winnipeg. They had a cool bicycling culture there. I would hear about these cool events and pop by, and take advantage of the events.Then I was like ok, moving to Halifax, a brand new place, I thought it would be cool to also connect with people who bike. So I thought I would join the HCC e-mail list, it was free to do that, so you enter your e-mail and you get notified about events. Like Rise & Grind, I love the free coffee once a month! It’s great!

But the first event I ever went to was actually the HCC birthday party. It popped up on my news feed, and I was hmm, I should check it out. So I went and surprisingly I met my girlfriend there. I challenged her to your tire-changing competition that you had there, but she talked my ear off before we could try it [laughs]. And we’ve been together ever since.