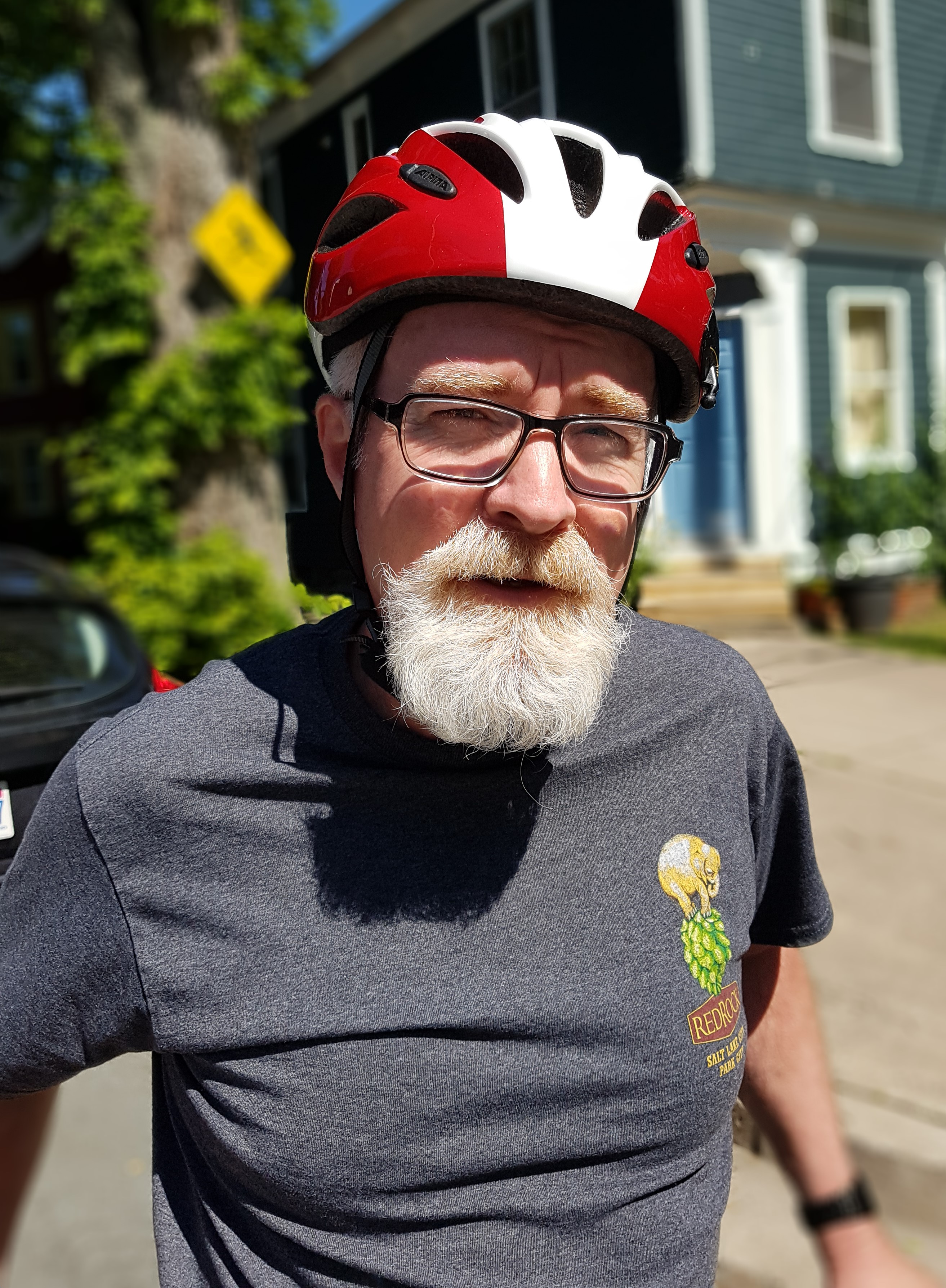 In a time where cyclists and drivers are often pitted against each other, HCC member Steven Keeling has a welcome perspective. The 60-year-old has been cycling seriously for the “last 40 years or so,” but is also behind the wheel, driving, for anywhere between 60 000 and 80 000 kilometres a year on business trips that have taken him to “pretty much every town in Atlantic Canada”. When most would identify as predominantly a cyclist or a driver, Steve fits firmly into both camps. This relatively unbiased position Steve finds himself in gives his perspective unique and notable insight. “As a frequent car driver, I can’t believe why more drivers don’t want more bike infrastructure. If there were more bicycles, there would be less cars, and thus less traffic headaches,” said Steve. In terms of comparing the two modes of transportation, “you experience a city, or a landscape, completely differently on a bike than you do in a car. Biking is fast and convenient; it is a pleasure, and it’s healthy. You see things on streets you would have never noticed in a car”. Steve and his wife, once Westmount residents, have recently returned to Halifax from years spent living in Hubbards. “I’m excited to be a [HCC] member, now that I’ve returned to Halifax”.

I met with Steve at the Humani-T Café, near the Hydrostone in the North End. Noteworthy segments of our conversation are below and have been edited for clarity and length. We’re happy to have you back Steve! Hubbards’ loss, in this case, is Halifax’s gain. 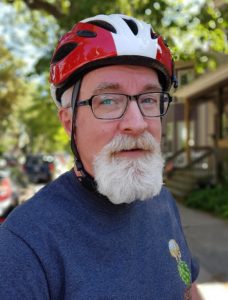 HCC: You’ve traveled a lot. What has stuck with you, from places that you’ve visited, in terms of a city’s bike friendliness?

SK: Me and my wife have traveled to Amsterdam. The experience was a real eye-opener. I know everyone talks about Amsterdam, and I had obviously heard of its reputation as a great biking city before I traveled there, but being there in person was really something. I’ve also rode in Vancouver, and the [bike] lane system there is spectacular. I don’t know if it’s the best in Canada, but it’s pretty darn close. There’s an intersection in Kitsilano, not far from Granville Island, which is a very busy intersection but they have this amazing, separate bike lane system. The bikes were non-stop in both directions. It was such a pleasure to ride there. The biggest concern was to watch out for slower cyclists, but I never had to worry about traffic. It’s far from Amsterdam, but it sure is a step up from what we have here.

HCC: How do you think conversations should be had with non-cyclist road users?

SK: It’s certainly going to be a combination of things. Social media for sure. I know the 1-metre rule got out there pretty well. Maybe we should have people in rush-hour traffic handing out flyers. Maybe standing outside of Canadian Tire, talking to people. Certainly, it would require multiple avenues. But it comes down to a matter of time. I also know that drivers, generally, will obey the rules of the road. They’ll gripe and complain, but once the infrastructure is put in place they will get used to it. The drivers in Halifax are the same as the drivers in Rome or Amsterdam – and they got used to it. And there’s a whole heck of a lot more bicyclists there than here. They may not like it, but they get used to it. And it just becomes the way things are, like everything else.

HCC: What would your advice be to a new cyclist?

SK: If you are riding in the lane, you have to comply to all the rules of the road. If you don’t, then you are taking a huge risk because in a conflict between a car and a cyclist, the car always wins. Signal. Stay off sidewalks. Follow the rules. There are courses like the intro to urban cycling course that you can take. I’ve been riding for 40 years but I’m still going to go (to the intro to urban cycling course) and get some tips on riding safely in the city. I would never say there is nothing to learn. Just because I’ve been riding a long time doesn’t mean there is nothing to learn. You are in control though. It’s just like driving. There are things that you can do that increase the risk you are taking. But when riding, you need to ride very, very, very aware.

HCC: What does the ideal bike lane look like to you?

SK: The ideal lane, obviously, is not a part of the roadway. Car drivers love to complain about parking. Part of it is that car drivers want to park right in-front of where they’re going so they don’t have to walk at all. I would be quite happy with a lane that is part of the road, but divided – not by a painted line – but with reflective buffer posts. Ideally, it would be great to completely separate bicycles from cars, but we don’t have room for that in Halifax. But really, a painted line gets violated constantly. People don’t want to scratch or dent their cars though, so that’s why those posts are such a good option. 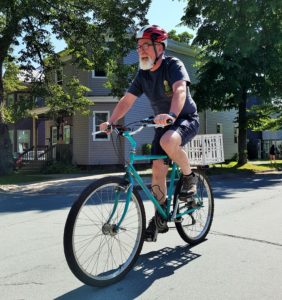 HCC: Why do you bike?

I’ve always looked at it like exercise. Even when I was young, I thought it was a healthy way to get around. You experience a city or a landscape completely differently on a bike than you do in a car, and I drive a lot – I have to. For practical purposes, I ride whenever I possibly can. I’ll likely bike hundreds of miles this summer. Also, it’s the speed. One of the things people in Halifax complain about is traffic. I am not kidding, this morning I brought my bicycle up out of the parking garage and whipped down to North Street for an appointment and locked my bike up to a rack in less time than I could have with my car. Now, there’s a point where the car is going to be faster. But it’s not always fast enough to make it practical. For sure, though, we need more bike racks in the city. If you’re not in a rush, though, you should bike. You see things on streets that you would have never noticed in a car. This is a great city.

HCC: What is your favorite bike ride in the HRM?

SK: Well, I go everywhere. My favourite ride has changed over the years. When I was in the Navy, we would leave the dockyard, ride like mad fools down Barrington, up Spring Garden, and down Young to Point Pleasant. We would have our lunch in Point Pleasant Park, and then ride back to the docks. Now, I think my favorite ride is to fly down Robie street because I can do the whole peninsula North to South. One of the best rides I’ve done was to leave Westmount, cross the Bridge, take the waterfront trail out to Eastern Passage, and then ride the trail system out to Lawrencetown Beach. It was a great ride that I really recommend.

HCC: Why do you decide to support HCC?

SK: It was because I saw that the HCC is the advocacy group for cyclists in Halifax. I’m excited to be a member, now that I’ve returned to Halifax. In spite of the city, I perceive a growth in ridership. My own perception is that there is a really good, healthy increase in ridership all the time. I’ve never seen so many bike shops in Halifax. If the bikes aren’t here, the businesses wouldn’t be.

HCC: What do you value about HCC’s work?

SK: I think the biggest thing is the advocacy for protected [bike] lanes. Car drivers complain about cyclists, but that’s because they just don’t understand. They make all the frustrating statements of ‘[cyclists] don’t pay taxes’ but they just aren’t educated. Moving past the Macdonald Bridge [bike approaches] and protected lanes, public education is the next most important thing. Public outreach to non-riders.  I think that would go a long way. Common sense discussion and education. There is too much science, too much data exists, that has easily proven that a balance (of car and bike infrastructure on roads) can be easily achieved. 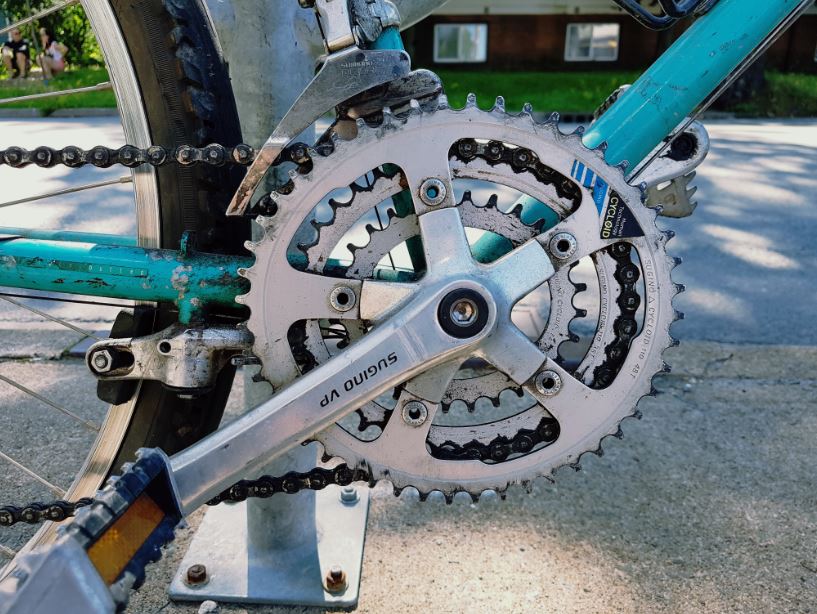