HCC member Kate Watson has run for city council in 2012 and 2016. While doing so, she thought a lot about what makes a city desirable for young people to live in. “I care a lot about Halifax and Dartmouth retaining their vibrancy,” she says. “I see cycling friendliness as vital to that. If you think about what it costs to own a car, if you think about being a young person – who can afford that? Commenting on the willpower of current city councillors, “we are lucky to have Sam [Austin], Lindell [Smith], Waye [Mason], and [Sean] Cleary. There’s a lot of potential right there,” says Kate.  Transforming into a cycle commuter in the last two years herself, Kate had this to say about her transition: “[it] was worth doing. It has enriched my life in many ways”.

I met with Kate at Just Us! Café in Dartmouth. Our conversation ranged from her evolving relationship with bicycling over time, to her experience attending our Women’s Intro to Urban Cycling Workshop, to advice she would give a cyclist just starting today. The conversation has been edited for clarity and length.

HCC: You’re in your 50s and you started to bike regularly two years ago. Can you describe your history with biking, and how your relationship with biking has evolved over time?

KW: I had a bad biking accident when I was growing up in Ontario. I hit gravel on a bike that was too big for me, and I fell into the centre of the road. A truck had to swerve around me, I had bad road rash, and I had to be driven home. And ever since then, I was terrified by the idea of biking. I thought it was a really dangerous and scary activity. But then, as a parent, my husband (who loves cycling) and I took our kids on a family trip to Quebec. We rented bikes and rode along their rails-to-trails system. The whole time I was thinking “this is so fun” and “you can go so fast on a bike!” That trip reacquainted me with cycling. Although, because the rails-to-trails system was flat and there were no cars around, I thought “OK, I like cycling, but just not on the road”.

A few year ago, me and my husband gave up our second car. I got really into transit and I felt so free being able to bus anywhere for $2.50. I used to think that a car meant freedom, but there’s something about being able to get anywhere you want for $2.50. The next step from there is if you don’t even need to wait or pay for a bus if you can just get on your bike a go anywhere – it’s pretty amazing!

I then started imagining a bicycling lifestyle. You know, those pictures of women in skirts on a bike with a basket holding a bottle of wine? I wanted to peddle around and get my groceries at the market. It was arguably more about that lifestyle than it was about getting around. Two years ago, my husband bought me a bike (a Giant Sedona) and I love it so much. I keep saying that the bike he gave me is the best gift I’ve ever received. I never thought I’d care so much for a bicycle, but now it feels like a part of me. I can sit upright when riding it, it has a basket on the back, and it fits me! It has totally opened up this world of cycling for me.

I then started driving my bike out to the Atlantic View Trail for rides, but I always felt silly having to drive somewhere before I could go for a bike ride. I then started doing group rides (organized by the HCC) and that gave me a lot of confidence. I would watch other people in those rides, and I would try to learn from their actions. I recently did the Women’s Intro to Urban Cycling Workshop (organized by the HCC) and I think that was the last key piece in the puzzle. Now, I ride my bike down Portland Street – do my fancy hand signals – and I’m really confident while doing so! 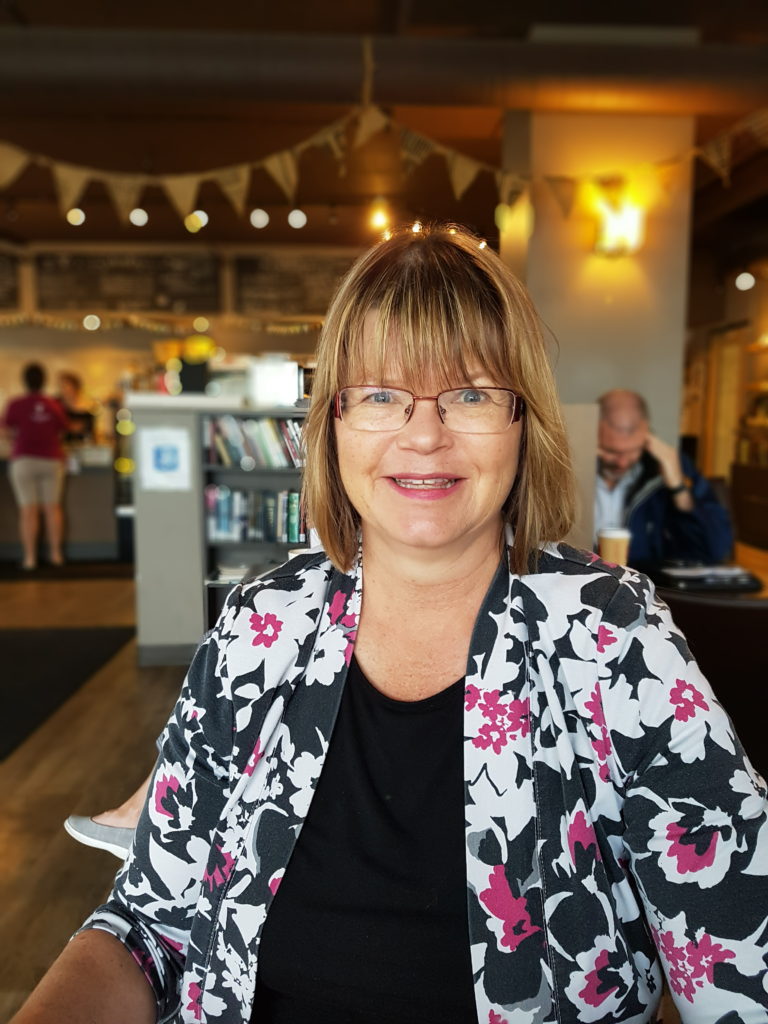 HCC: What was it that you got out of attending the Women’s Intro to Urban Cycling Workshop?

KW: The course reinforced for me that safe cycling is all about visibility and predictability. There were things that I thought I was doing right and that I can now see were wrong. For instance, if there was a gap in parked cars, I would weave in and out to try to be polite to motorists. It makes so much more sense if you pick a line and stay on it. That way, cars know where you are – you’re not weaving in and out, and surprising them. Visible and predictable cycling, I think, would make cars and bikes get along a lot better.

HCC: What do you think about motorists in Halifax? Your last answer alluded to conflict between cars and bikes.

KW: I’m a driver, I’m a pedestrian, I use public transit, and I’m a biker. It’s true, sometimes when I’m driving I think “stupid cyclist!”, and sometimes when I’m biking I think “stupid driver!” What bothers me, though, is that it’s almost like car drivers are jealous of the things you can do on a bike, and that jealousy seems weird to me. I wish car drivers would realize that if I am getting places quickly and efficiently on my bike, that means that they can have my parking spot! It’s a really good thing, for everybody, that I’m on a bike.

HCC: What is a resource that you wish existed when you were learning to bike?

KW: If I go back to when my kids were small, maybe something around family cycling. If you can convince parents that it is safe, and if you can raise kids as cyclists, then they won’t be like me where they have this big gap in their life where they’re not riding a bike.

HCC: Do you think you can judge a city’s bike friendliness by whether or not parents feel safe letting their kids ride their bikes on the streets?

KW: Yes, exactly. I’ve gone through this personal transformation where I’ve gained enough confidence for me to cycle, but you shouldn’t have to go through that. It shouldn’t be so difficult. I love looking at pictures of the Netherlands. Maybe I’m painting this rosy picture, but it looks like you wouldn’t be afraid to take your kid from the hospital nursery, after they were born, home in a bike basket. Literally, you see people from birth to their 90s on bikes. And that’s like “wow”! Now that I’m a grandmother, I am re-seeing the city’s bike infrastructure through my granddaughter’s eyes and it doesn’t leave me feeling reassured.

HCC: How long have you been an HCC member and what value, do you perceive, is in the work that the HCC does?

KW: I’ve been a member for a couple of years. Definitely, there is a value to the work HCC does. I’m learning that if people don’t speak up, nothing changes! I really think we are getting the approaches to the Macdonald Bridge changed because the HCC has kept it relevant in the news, and has kept the pressure on city council to do something about it. From my point of view, I’m interested in a lot things, but you need these advocacy groups that are actually doing something about it. It’s our job as citizens to say what we want, but we need people to keep pushing that button to say “remember? This is what we want!”. Affecting the news climate is definitely the biggest service that HCC provides. But then there’s the little things. My story is how they affected my life as an individual. The HCC is changing this city for cyclists. I’m not sure I would be cycling the way I am if I hadn’t joined the Cycling Coalition. I think they probably played the biggest part in me feeling confident enough to ride my bike as a form of transportation on the roads.

HCC: If someone doesn’t bike right now, what is your advice to them? Would you encourage them to bike in Dartmouth?

KW: Yes, I would. It’s not as scary as you think. I’m getting kind of worried about that fact that I need to be more afraid on the roads. It’s not that I’m not vigilant, but I’m at the point where I’m worried that I’m too comfortable on the roads now. Maybe I’m in that honeymoon period where I used to be so afraid and now I feel so brave and comfortable. Maybe a really good cyclist is somewhere in between!

My advice to a new cyclist is to get a bike that fits, and to get it fitted. Get a bell, get lights, get a basket, and get a good lock. I got all those pieces one at a time, but now that I have them all, I realize I need them all. All those things have made my cycling experience better. I’d say take a course. I’d say ride in a group because it’s way more fun at first and builds your confidence. When I found out that I’ll be going to NSCC in the fall, I started planning out all of these routes to get there without using the main roads, but it’s really freeing as a cycling to feel like you can ride anywhere. I don’t know how to replicate the path I took, but I got to this point. So, my story is a testament that anybody can go through this learning curve and feel this comfortable. Also, my transition to cycling, I must say, was worth doing. Its enriched my life in many ways.

HCC: If the HCC could focus on any specific initiative, what would you like to see that be?