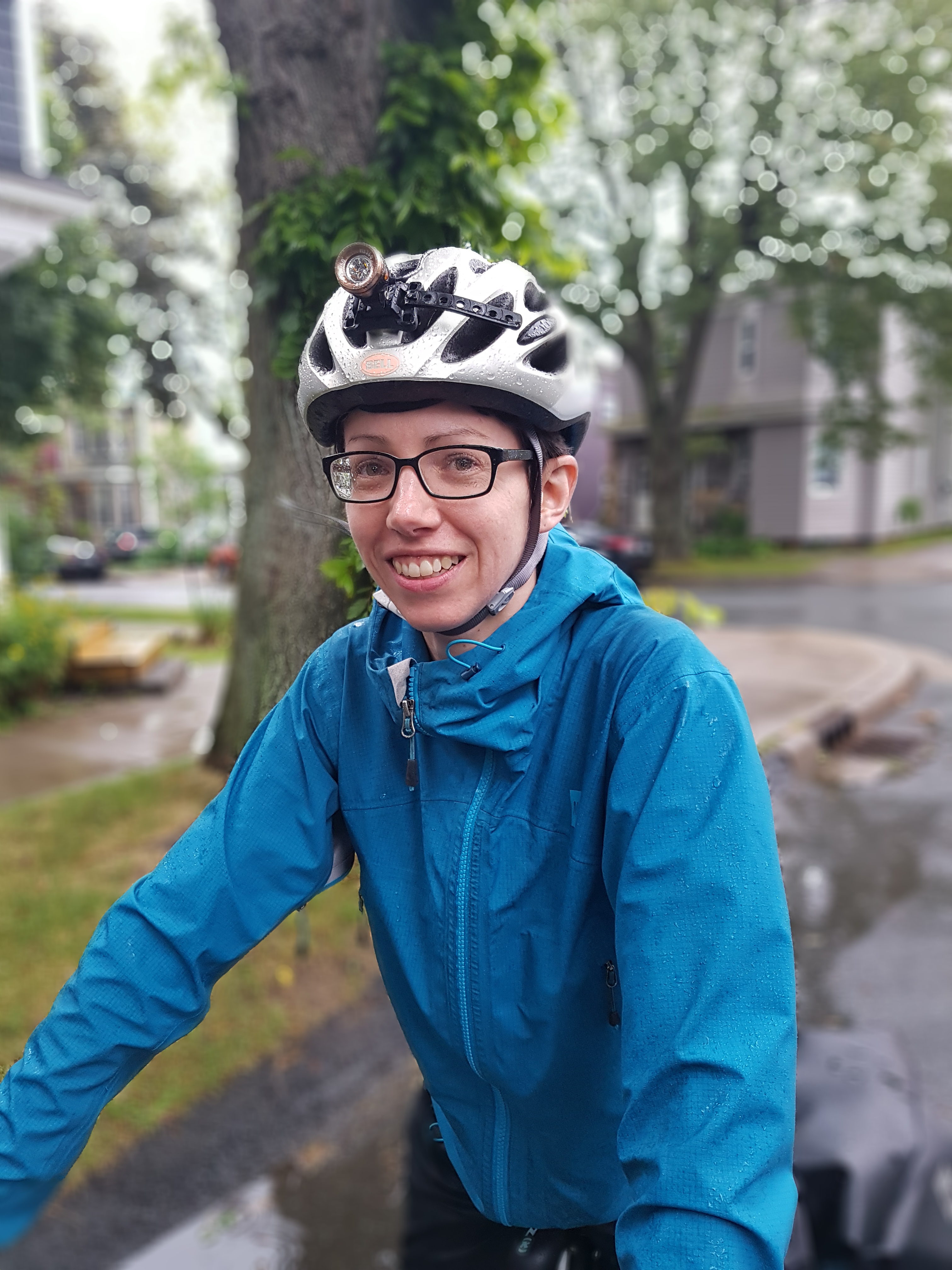 For HCC member Jillian Banfield, designing streets inclusively for all ages and abilities users is something she has a personal stake in. “There’s this assumption that all people who cycle are able-bodied,” says Jillian, who lives with a physical disability herself. “We talk about all ages and abilities infrastructure, but people don’t think about the abilities part as much,” she says. Citing an unpleasant exchange over Twitter, someone messaged her: “if you don’t feel safe on your bike, then get off and walk it”. But to Jillian, “I can’t do that”, she says, “if I’m not cycling, I’m using some other mode of transportation that is going to cause me more pain or disability”. The saying “all ages and abilities infrastructure” means more to Jillian than it does to most others – “it has material impact on me”. “I just think that people need to think about it a little more deeply. I cycle 20 km+ per day but I can’t walk down the block. We need to recognize that some people cycling have disabilities.”

Jillian is a former board member of the Halifax Cycling Coalition. I met with Jillian at Lion & Bright on Agricola Street. Segments of our conversation are below and have been edited for clarity and length. Thanks for your steady support of the cycling movement in Halifax, Jillian!

HCC: How would you define yourself as a cyclist?

JB: I bike every day. If it’s cold and rainy, I’ll still do it. There are a few days in the winter when I don’t think it’s appropriate to cycle due to street conditions. It’s basically my only mode of transportation in the city. I pretty much can’t walk anywhere because I have arthritis, so I use my bike for transportation everywhere.  I commute to work, use it for grocery runs, I do it for fun and recreation, for exercise, everything. I have a very intimate connection with my bicycle, I would say. My real reliance on my bike started when I moved back to Halifax, four years ago. I cycled a bit when I was in grad school and in my postdoc but not nearly to the extent that I do now. That’s partly because I had surgery when I moved back here which decreased my ability to walk. My dependency on my bicycle certainly increased after that.

Owning a car is something I never wanted to do. It was something I actively avoided. From many perspectives, I never thought that a car was a reasonable alternative. Certainly, I don’t want to produce more greenhouse gas emissions, all the environmental reasons.

A bike is just freedom for me, really.

HCC: What is your comfort level on the road?

JB: I’m aware of possible risks and, through some combination of stubbornness and avoiding to think about the risks, I’m willing to cycle pretty much on any city street. I don’t think it’s necessarily safe, but I’m also in this conflicted position where it’s my only way to get around, so if I don’t suck it up and deal with it, then I won’t be able to go anywhere. I don’t think it’s super safe to cycle around here. I think you have to have some willingness to take on a significant risk to cycle around Halifax, which is unfortunate, but is something that I do for various reasons.

HCC: What is your opinion of current bike infrastructure in the city?

JB: I don’t think the infrastructure is anywhere near where it should be. I’ll never think that paint on the road is enough. I don’t want to say, though, that there is no advantage to having paint on the road – I think painted lines on Bell road, for example, are advantageous because they do segregate a part of the road for people cycling. And the more that we see people cycling around the city, the more that people think there has to be infrastructure for it. That said, I’m not willing to accept anything less than a reasonable protected bike lane for a child, or someone who has a disability, or older folks who I see riding on the sidewalk because they aren’t willing to accept the risk of riding on the street, and I can’t blame them.  Lanes need to be completely protected. I wouldn’t even consider University Avenue, where the bollards are spaced far enough apart that you can actually park a car between them, a protected bike lane. What matters most to me is getting people to cycle who currently aren’t comfortable cycling. Our streets aren’t for all ages and abilities.

Do you think a good barometer of a city’s bike friendliness is whether or not you’d feel comfortable with your kid riding on the streets?

Absolutely. Since we’ve been teaching a child to ride on the street for the past several months, that’s the conversation we always have is “is this a situation in which we think he could ride on the street”, and if not then its not acceptable for anybody. Right now, we choose all the quietest streets that we can and if it comes to a section where we don’t think its appropriate, then we ride on the sidewalk together. And, laws be damned, its just foolish to think that people are going to ride in high traffic areas where they don’t feel comfortable and I don’t think its to our advantage to tell those people to go ride on the trails where they feel safe.

What is your cycling pet-peeve?
There’s this assumption that people who cycle are able-bodied all the time. The saying “all ages and abilities” means more to me than likely to most others. I just think people need to think about it a little more deeply. We don’t recognize that some people cycling around have disabilities. I cycle 20 km+ per day, but I can’t walk down the block. So if I had to bike on the sidewalk, I’d be accused of being some arrogant cyclist but in reality I just can’t walk that section.

We talk about all ages and abilities, but people don’t think about the abilities part as much. There are standards in the world that we can draw from for bike lane design, but also we need to think about things like intersections. I had this unpleasant exchange on Twitter the other day where someone said, “if you don’t feel safe on your bike, then just hop off and walk it” and I said “well, I can’t do that”. But it got me thinking about intersections and about how bike lanes here stop well before intersections and you sometimes feel unsafe when you get dropped off there – but I’m not going to hop of my bicycle. Even places like crossing the commons where you’re supposed to dismount at a cross-walk. Dismounting is hard for people. So designing the lanes, but also thinking as a complete network – like really complete – and bicycle signals. So things like that, that are often thought of as a second thought rather than a primary focus. You go to the oval on a Saturday afternoon – but they’ve probably driven there. So how can we make the experience of the Oval throughout the city? 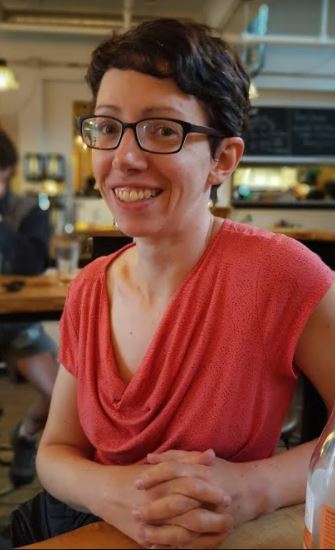 HCC: What would it take to transform Halifax into a cycling city?

JB: I think it takes political will and a bit of money to do it. Like we saw in Edmonton, they just came out and just put down concrete barriers. There wasn’t a huge pilot phase, and years of pushing things back – people just did it. I think that the perspective that we have to reach some happy medium leads itself into accepting the status quo. If Halifax wants to be bold about things then they will do something that meets ideal standards according to NACTO, for example.

HCC: Do you think that the current sitting of city counselors is maybe as pro-cycling as it has ever been?

JB: Absolutely. We have four or five counselors that regularly cycle, so they understand the issues and they push for better standards that others might not. This is a relatively new counsel session, but they are continuing to bring up cycling issues. That’s important. We’re seeing big projects – like the bikeway for the bridge. So as those come to fruition it is certainly an exciting time. It seems like there is real change happening.

HCC: What is your opinion of the staff recommendation on the Macdonald Bridge bikeway approaches?

HCC: It was the first time I’ve actually been excited about a recommendation about bike infrastructure in Halifax. I think they recommended the right things. I’d like to see more protection for once you get off the bridge on both sides, but in terms of the actual ramp and in terms of recognizing that things need to be improved in Dartmouth – those were super important and great to see.

HCC: What prompted you to become very involved with the HCC (as a former board member)?

JB: Well I had just moved back to Halifax at the time. I was getting more involved in the community. I was looking at ways to volunteer my time, and then soon after there was a call for new board members. Being a board member was a great opportunity to get a better understanding of what the climate is for cycling in Halifax. I met probably my favourite people in the city through being a board member. Not to denigrate the spandex-wearing bike riding community, but these are really down to earth people who get that cycling is a social justice issue, not just a recreation or sporting activity. Also, seeing all the ways in which cycling could improve public life motivated me to join. Being a board member reoriented my own ideas about what a street is. To me, now, a street is a public space and it’s not just for cars. Yes, people are in cars, but they’re not just in cars. You see it all the time with initiatives like Switch – once you open-up the street, amazing things happen. To be able to think about doing that in a way that it happens every day of the year, as opposed to one afternoon, was really eye opening for me.

HCC: What would your advice be to a new cyclist?

JB: I’d find a buddy probably. Someone who knows the quieter routes. Route planning is a big thing, for sure. Maybe go on the trails for an experience, but I wouldn’t do that as a first experience as it would make you feel comfortable on a bike. And you should probably be a little more cautious. You need to learn how to bike outside of the door zone and look out for potholes. I think route planning is the biggest thing. All the other things, weather, hills – you just get used to them. If you have good gear, weather isn’t a big deal.

HCC: What value do you see in the HCC?

JB: I think having a consistent voice advocating for these all ages and abilities kinds of infrastructure is the absolutely most important part of it. I was so happy when the HCC was able to hire (Executive Director) Kelsey [Lane]. Since then, we’ve been able to be much more consistent voice in advocacy. I think Kelsey does an amazing job at constantly talking to the political players and holding people to account. We’ve also become the resource in the city for any cycling issue, and I think we have the right perspective on things. I think it’s a balanced perspective, but also one that’s advocating for the ideal infrastructure at all times, not compromising on what’s important.