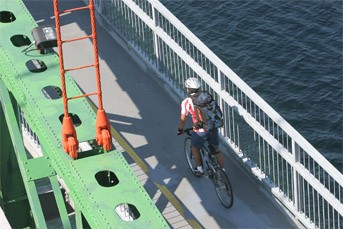 People who walk and bike are frustrated that the MacDonald Bridge bicycle lane and sidewalk have been closed for two years, inconveniencing people for much longer than initially promised. While the Halifax Cycling Coalition is part of the group that lives this inconvenience daily, we have worked closely with Halifax Harbour Bridges over the years and understand the challenges they are experiencing in this complicated engineering project.

The Halifax Cycling Coalition is looking forward to the re-opening of the bicycle lane on the MacDonald Bridge, that is currently projected for the end of June. The bicycle lane on the MacDonald Bridge was a key connection for many people’s daily commutes, approximate 500 people per day used the Macdonald Bridge prior to closure. The bike lane was originally scheduled to re-open in March*. However, due to complications with other aspects of the Big Lift project, the opening of the bike lane was delayed until June.

Until the MacDonald Bridge reopens, people can bring their bicycles onto the bus, ferry or use the shuttle service provided by the Big Lift project free of charge. All transit is free for people with a bicycle from June 2-11 and part of HRM Bike Week.

Although we are not a part of the protest ride today, we understand the frustration of having to wait for the bike lane on the MacDonald Bridge to reopen. We support HHB taking the appropriate steps to ensure that the those participating in the protest today can do so safely.

There will be no changes to the bicycle lane from when it was closed in June, 2015.   Staff are currently working on modifications to the bicycle lane that will make it accessible for people of all ages and abilities. The preferred option for an all ages and abilities fly-over ramp will be presented to the city’s Transportation Standing Committee in July. The bike lane will remain open during the construction of the flyover ramp.

The Halifax Cycling Coalition is working hard both in public and meetings with city staff to ensure that the flyover ramp continues without delay.

*Clarification: The original HHB schedule anticipated the bike lane to be open in December, before being delayed to March, June, and finally end of June.