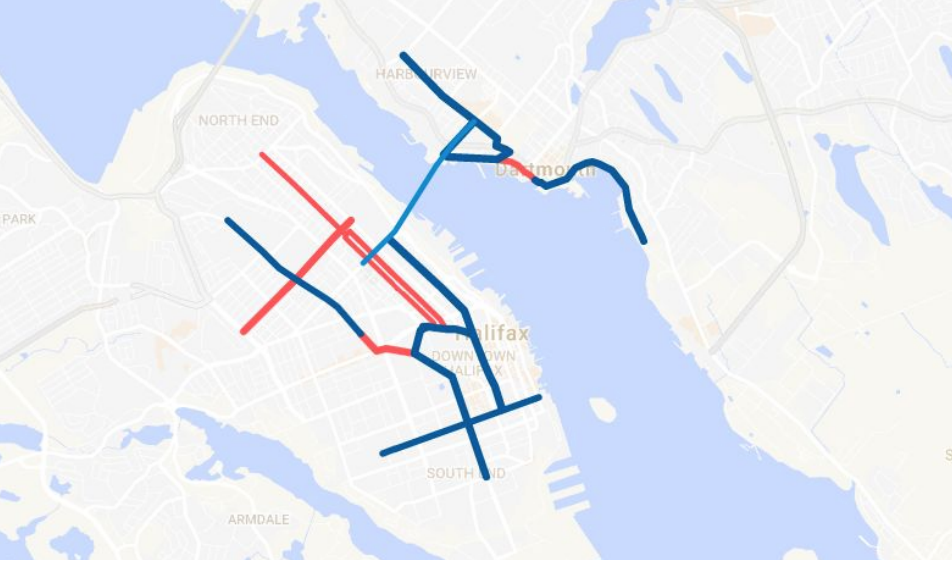 On March 23rd, the project manager of the Integrated Mobility Plan (IMP) spoke at the Transportation Standing Committee and stated that a minimum grid of bicycle lanes is one of the Big Moves needed to shift the transportation system in Halifax. “We have heard loud and clear from the community that they do not want just one bicycle lane, but a network of high-quality protected bicycle lanes”.

We have had a taste of bicycle infrastructure with several painted bicycle lanes and the first protected bike lane on Rainnie Drive. It is now apparent that the next step for Halifax is to follow the example of our peers in Calgary, Victoria, Edmonton, and commit to making a minimum grid of protected bicycle lanes in the Regional Centre.

A potential minimum grid network for Halifax and Dartmouth (Blue= current or upcoming projects, Red= new projects/key connections). The city’s current projects put Halifax in a good position for a minimum grid to be realized. The map above shows that, by enhancing existing bicycle lanes and upcoming projects, there is a good foundation for a network spine. Enhancing existing bicycle lanes and creating high-quality, separated bicycles lanes on new routes at once to form a network, will ensure consistent quality and a faster installation.

The IMP’s bike network proposal is a huge step forward but there is still work to be done. In order to create a network of bicycle lanes that maximize impact for safety and ridership, there are some key changes that need to be made to the current IMP proposal:

Let staff know what you want to see from a protected minimum grid. Attend one of the Integrated Mobility Plan listed below or e-mail Halifax’s AT coordinator Mark Nener nenerm@halifax.ca and CC contact@cycleahalifax.ca to show support for a minimum grid of protected lanes in the Halifax Regional Centre.