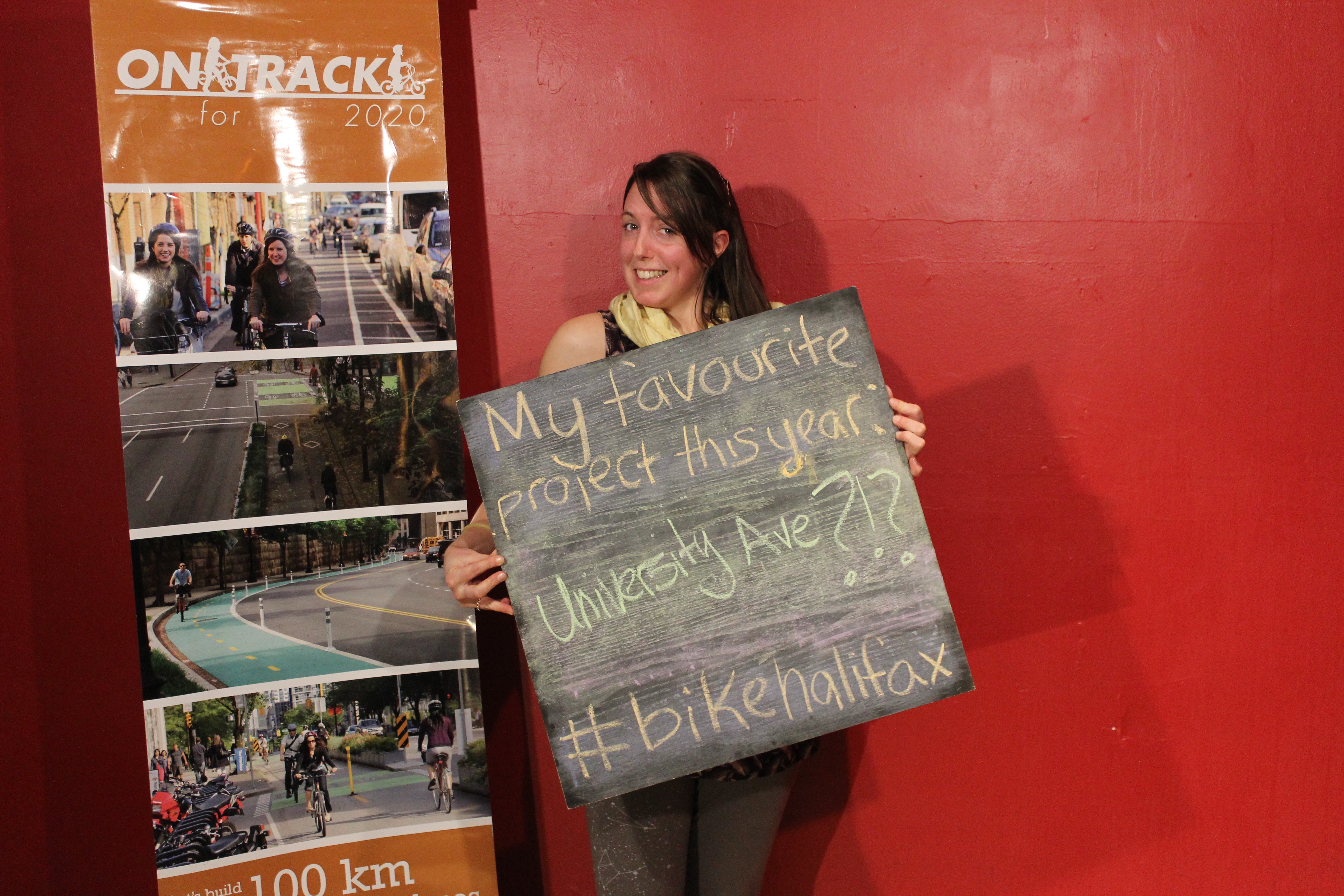 A November chill cleared the sidewalks of Gottingen Street as the Halifax Cycling Coalition celebrate eight years of success. The warm interior of The Company House was a welcoming maze of black wool coats and grey toques, bonded in place by the magic of a swag table’s wares. Two friendly volunteers handed out #ShareTheRoad buttons, 1-metre magnets from DalTRAC and crisp entry ballots. Party, thy name is door prize.

A keynote address featuring our eighth year in review video (below) and slide show was delivered by Chair Ben Wedge. “Five years after it was approved by council, Hollis Street has a bicycle lane,” he said. “Normally this would be the update – but this year the list of projects is too long to fit in a presentation!” 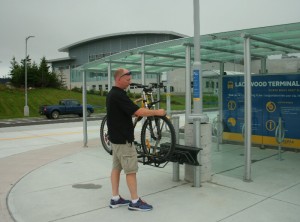 Rob Jahncke of Halifax Transit Loads His Bicycle onto the Rack Demo.

Then there was a photo of the Lacewood Terminal’s demo for a bus bike rack. A light hearted moment arose when Ben strained against a spot light above the stage to locate volunteer Paul Partington, the photographer of a photo included in his presentation. Ben recalled Paul’s first use of Halifax Transits bus mounted bike racks. “Don’t forget to put the bike rack back up after you leave, right Paul?” “They will beep at you if you don’t,” replied Paul, sheepishly.

The Halifax Bike Awards recognize the contributions of local businesses and cyclists to the cycling community in Halifax. They are decided by the public using an online ballot. Each Bicycle Award recipient received a framed certificate and was properly embarrassed by the honor as they approached the stage.

*HCC board members were to be excluded from eligibility, however this was missed due to a clerical error and Ben received unanimous support. Unable to point to a second place winner he begrudgingly accepted the award.

A sensational calm tempered the party as the ballot for a helmet mountable video camera was drawn by Volunteer Coordinator Eliza Jackson. Applause cracked the air as the lucky winner rose to claim her prize. 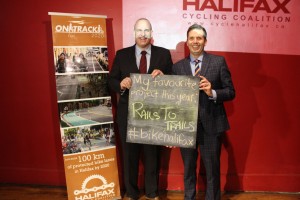 A photo station and photographer gave participants the opportunity to praise their favourite cycling infrastructure project of the year. The Rainie Drive protected bike lane project was a popular choice as was Switch Open Streets. Even MLAs Joachim Stroink and Labi Kousoulis joined the fun.

Pepperoni and Greek style pizza arrived as a lone carrot in the veggie platter… is that cake? Two triple chocolate cakes from the Petite Baker were cut into squares and platted as requested by membership coordinator Jillian Banfield. The Folk and Country Line played their folk-inspired jams, breaking only for a round of Happy Birthday. Guests mingled and chatted in groups as some  snuck away to enjoyed a second piece of triple chocolate cake (cough). Let’s hope #9 includes even more to celebrate!