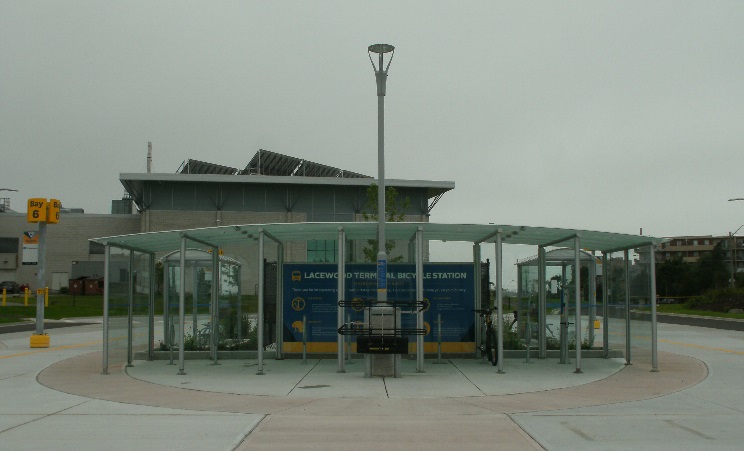 Halifax Transit welcomed the public to explore the new Lacewood bus terminal in Clayton Park on Saturday, with a community barbecue. Over 750 hotdogs were grilled and bunned on the west platform of the terminal. For cyclists, the main course was a new concept in cycling infrastructure integration: The Bicycle Station. 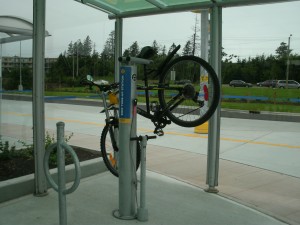 Located on the east platform of the terminal, the enclosed glass pane shelter contains nine double-sided bicycle racks and a galvanized repair stand. Cyclists will recognize the similarities between this repair stand and the existing network of repair stands throughout Halifax. This new repair stand has a unique feature: the inflation line has a magnetic collar to keep the air pump safely attached to the side of the pump cylinder. This keeps the line off of the ground when not in use. No loose inflation line on the ground means no unscheduled trips for cyclists.

Rob Jahncke of Halifax Transit demonstrated the bus bike rack demo station for me. Located on a concrete column in front of the bicycle station, the fully operational bus bicycle rack allows new cyclists to learn to load their bicycles on to the bus rack. “ This is a new feature that will help us educate our ridership,” said Jahncke, a cycling infrastructure coordinator from Ottawa. “I would like to have one installed at each terminal […] where space allows.” Cyclists can practice loading their bicycle onto the rack and securing it with the spring loaded tension arm as they would when commuting.

“Montreal has received a lot of attention in the media for its cycling infrastructure,” said Jahncke. “I believe once people see what we are doing here in Halifax, we could unseat Montreal as the more cycling friendly city.” 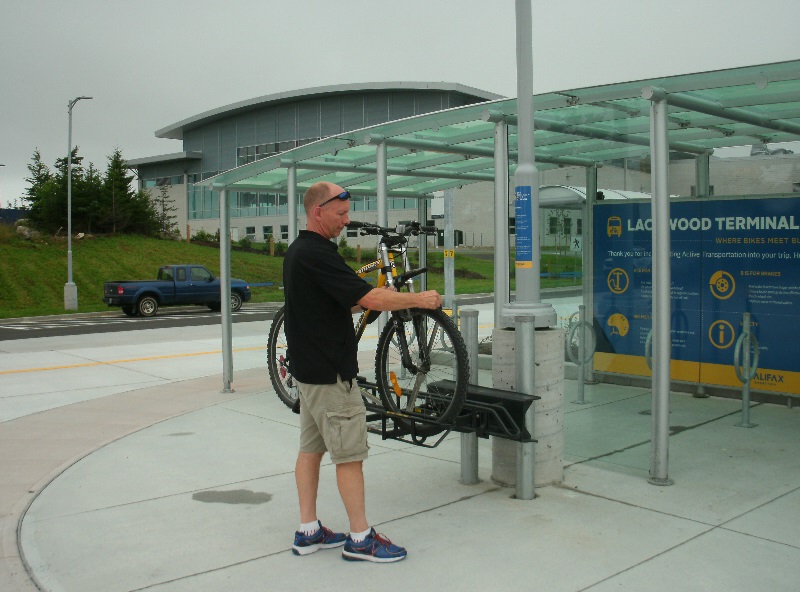 Replace the rack when retrieving your bicycle

I related my first experience with the bus mounted bicycle rack to Mr. Jahncke. Upon disembarking at my destination, I left the bicycle rack in the down position and began to walk away. I received a quick shock-inducing blast of the bus’ horn. I turned to look back at the bus. I didn’t know what I had done. Had I dropped something? The operator pointed down to the bicycle rack and I quickly realized my mistake. I returned and put the rack back into the upright position and apologized to the driver.

The design of the Lacewood Terminal is in line with the Halifax Cycling Coalition’s mandate. Its facilities improve the bicycle network in Clayton Park and help to integrate cycling into Halifax’s transit network. Clear signage promotes active transportation and the repair tower allows cyclists to maintain their bicycles in working order.

“Montreal has received a lot of attention in the media for its cycling infrastructure,” said Jahncke. “I believe once people see what we are doing here in Halifax, we could unseat Montreal as the more cycling friendly city.” With investments like this, cyclists have a strong partner in safe active transportation in Halifax Transit.

Editor’s note: an earlier version of this article indicated Mr. Jahncke was from Montreal, not Ottawa.