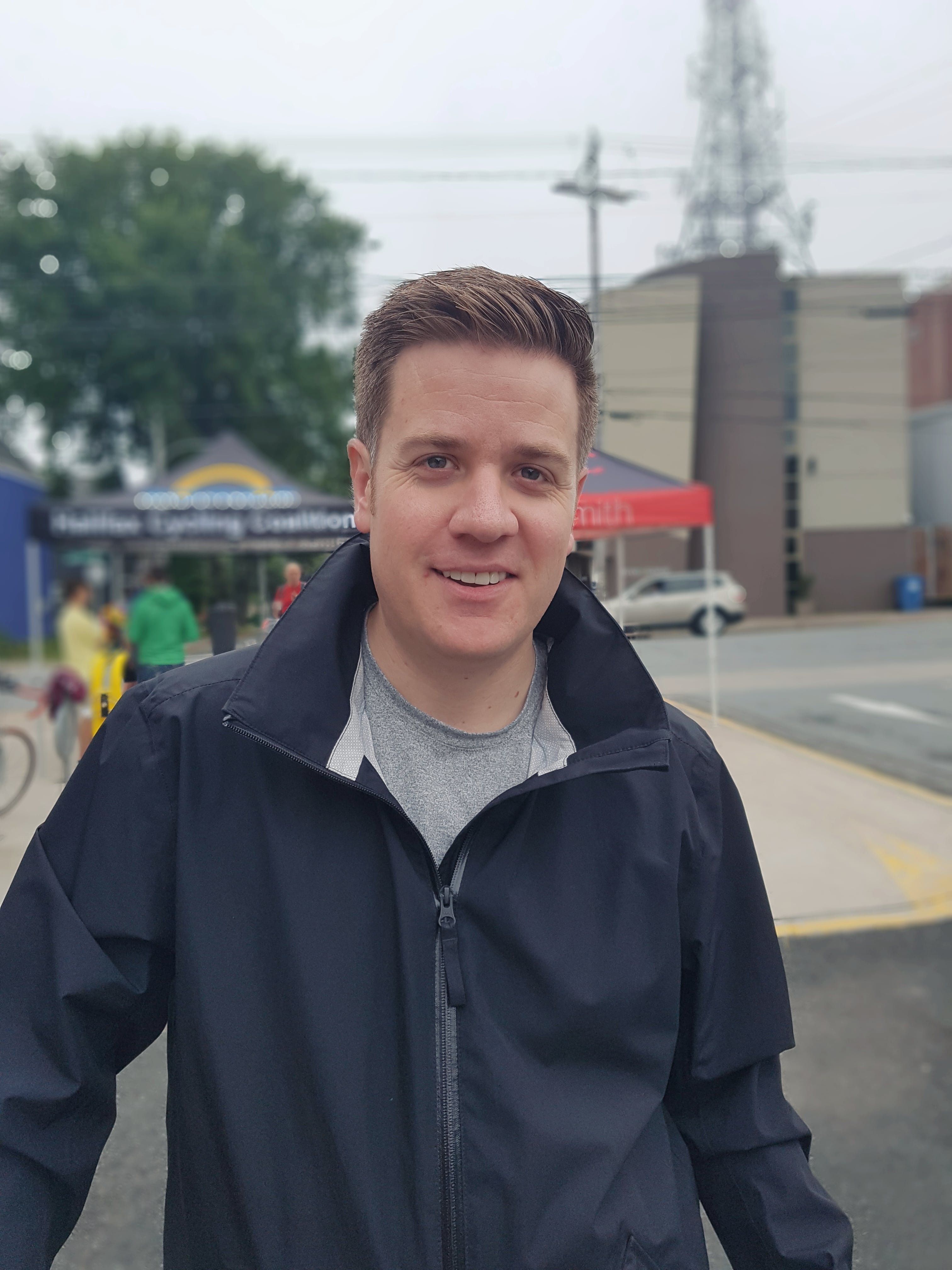 HCC member Scott Pickup’s story is a compelling one. He commutes to work by bike, every day, all-year round. He meticulously tunes his growing fleet of bicycles, bound to grow one larger as Scott was on his way to buy another bike at the time of our conversation. “I love it. I can’t talk about cycling enough. I love it,” he says. But this was certainly not always the case. About five years ago, Scott did not bike. More so, he had no interest in biking – never mind cycle commuting.  Living in Ottawa at the time, Scott was looking for things to do with his wife (partner at the time). As an avid cyclist herself, she started bugging him to get a bike, a request to which he begrudgingly agreed. Fast forward five years, Scott now says phrases like “the best parts of my day are spent biking to work and biking home” and “I’m pretty passionate about making Halifax a better biking city”. The path Scott has taken, from “someone who would never consider cycling” to “someone who can’t talk about it enough”, is an awesome one! While even Scott himself wouldn’t suggest that he is a trail blazer, his story is an important one to give exposure to if we want more people to give cycling a fair shot and to think, as Scott puts it, “maybe I would enjoy biking if I gave it a try”.

I met with Scott at Java Blend Coffee Roasters in the North End. Segments of our conversation are below, and have been edited for clarity and length. Thanks for being an awesome HCC member Scott!

HCC: How would you characterize yourself as a cyclist?

SP: I’m definitely a commuter. I bike to work everyday, all-year round. Its an interesting story, I think. My wife, Melanie,  lived in Ottawa for a while and was a huge cyclist (commuter/road biker). We met 5 years ago, and biking was one of those things I hadn’t done since I was a kid. She started bugging me to get a bike, and I annoyedly got a bike and started riding with her. I then started doing some mechanics on it, and all of a sudden, about a year later, I started commuting to work in the summer. From there, it just continued to snowball. I bought a couple more bikes; now I have a Yuba Mundo cargo bike with kid seats on the back. I think about biking every day. I love it – it’s a huge passion of mine. The best parts of my day are spent biking to work and biking home. I never thought I’d be a cyclist, but now I rarely use a car at all. I mean, when we’re leaving the city with our kids we use a car. But rarely do I use a car in the city. I don’t know exactly how I’d describe myself as a cyclist, but I love it. I can’t talk about cycling enough. I love it.

HCC: How do we change the general attitude of Haligonians to make the city more welcoming towards cyclists?

SP: I think we just need to wait until there are more bikers. People who don’t bike will never realize the benefits of cycling. People have the long-lasting belief that roads are built for cars. Its like teaching old dogs new tricks. People talk about the health benefits, the savings to provincial health that come from biking, et cetera, but to me these arguments are overly based on assumptions. That reduces those studies to conceptual arguments. People who don’t want bikes on the road won’t be compelled just by conceptual reasons. We need more bikes on the road, and that itself will change behavior. 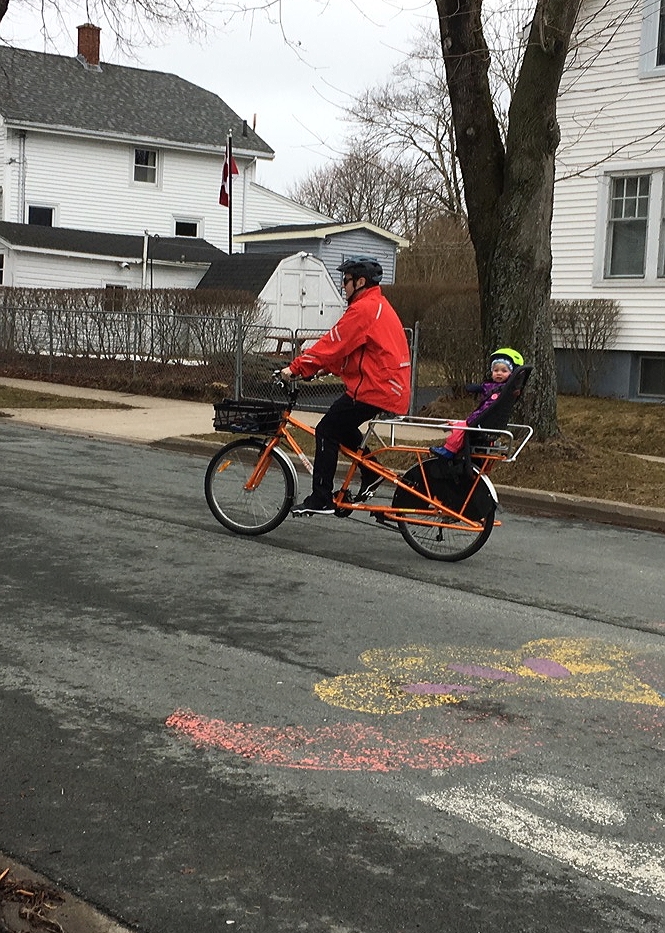 Scott and his daughter, out on a ride.

HCC: What are the benefits of cycling, to you?

SP: My street is at the highest point of the Peninsula. One of the nice things about that is that my morning bike ride is always downhill. I’ve been lucky enough to work at places that have a closet, and I change once I get to work. At the end of the day, that moment when I get on my bike (that I’ve meticulously tuned up and cleaned) is a moment that I have to myself, and is an amazing personal time for me. The other benefit is that my bike ride home is always uphill, I’m going straight uphill for 15 minutes to get home and it gives me a great work out. Any stresses I have from work are lost once I get on my bike and rip on my ride. I’ll get home sooner if I have a bad day. I vent through biking home as quickly as possible. That’s may not be a common benefit to all cyclists, but I’m always getting home stress-free.

Also, I feel so much less stress getting around in the city when on my bike. That was never a consideration when I was driving but now I look forward to the journey of getting to places around town. I just love riding bikes. The journey is what it’s all about.

I also reap the health benefits and, like anybody else, that makes you feel better. Now with the cargo bike, I take my kid out for rides about every other night. My daughter calls it her bike which is really nice.

HCC: What value do you see in protected bike lanes?

SP: If I could choose to have 1) a network of non-segregated painted lanes, or 2) a few protected but isolated bike lanes, I’ll always answer number 1. It works for me. I am happy with the Windsor Street bike lane, for example. Of course, protected bike lanes are always better. However, as a confident cyclist, I am 100% happy with just bike lanes that aren’t protected. I’d way prefer protected lanes, but if the happy medium is the non-protected lanes and that means me can have more of them, then that gets my vote. 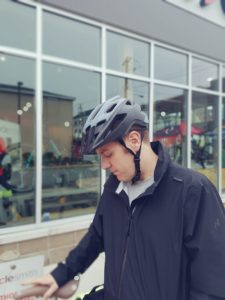 HCC: What is your advice to a new cyclist?

SP: As a lawyer, when I began biking, I immediately went and looked at the Motor Vehicle Act to see what exceptions there were for bikers. For example, I found out that I can go up the right side of the road (bypassing traffic).  I wanted to determine what my legal rights were; ‘what am I allowed to do?’. I think that’s an important piece. I wouldn’t recommend that everyone go read the MVA, but it is important that people understand their rights and responsibilities as a bicyclist. The primary rule is don’t do something if it’s not safe to do so. And that’s important for car drivers to understand too.  Also, I’d advise new cyclists to plan their route. You can choose routes that are less travelled and have less potholes.

HCC: What is the most pressing issue in Halifax in regards to cycling advocacy?

SP: Its definitely bike lanes. When I say that I’m a confident cyclist, all I mean by that is that I don’t feel scared on streets without a bike lane. However, I feel so much more at ease when there are bike lanes, and I can get around faster and safer if they exist. If we get a bike lane on Almon Street, then about 50% of my daily commute will be along bike lanes which would be amazing.

HCC: What is improving about cycling in Halifax?

HCC: What value do you see in the Halifax Cycling Coalition’s work?

SP: I think you folks are doing great things, like mobilizing people to go to meetings, (ex: the Almon Street meeting). I love the twitter feed in terms of knowing what’s going on in cycling news around Halifax. I like the infrastructure work you do, something as simple as putting up bike racks. In terms of the advocacy side of things, I don’t know what the real priorities should be in terms of where we should invest time. I don’t know enough about the ins and outs of that. I would want to be a member just to say that I’m a member of the Halifax Cycling Coalition. But [my being a member] was really to make a financial contribution. I know how organizations like the HCC work, and membership is a large piece of the funding and I wanted to make sure I contributed a couple of bucks, besides just membership. I think it’s important to do issue based fundraising. That’s something I’m always willing to donate to.