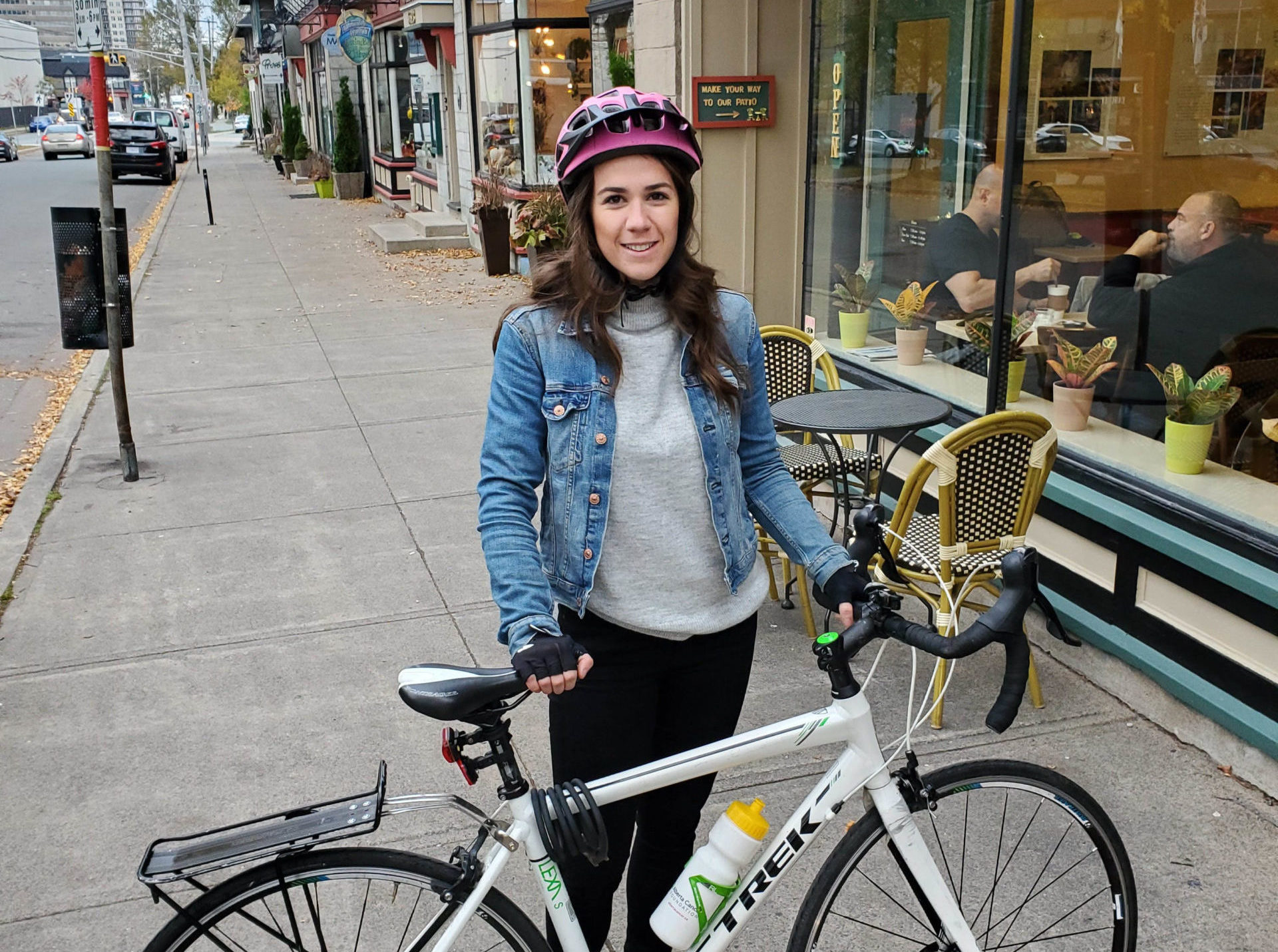 In the summer of 2019, Hilary Angrove had a close call with a semi-truck while riding her bicycle on the Bedford Highway. Shaken up from the experience, she chose to share her story with Chronicle Herald readers in an op-ed piece, closing with a call to action for city planners and politicians to improve routes for people riding bikes. We caught up with Hilary a few weeks later at Julien’s Cafe in the Hydrostone Market to learn more about her experience. We chatted about cycling safety and local bike routes. Segments of our conversation can be found below and have been edited for clarity and length. 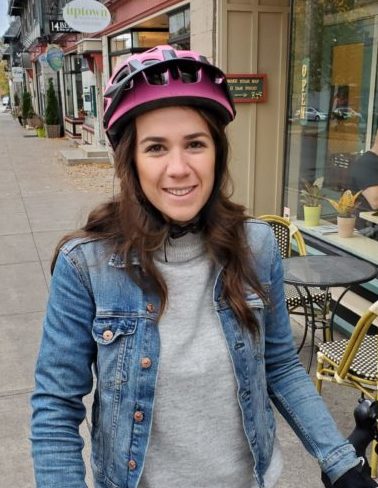 HCC: Why do you bike?

HA: I bike for transportation because I don’t have a car, but I choose not to have a car because I live on the peninsula, so I can essentially do everything I need to do by biking. Actually it is a lot faster to get places on the peninsula by biking rather than driving. I’ll often be at parties or out with friends and if they’re driving somewhere, because they have to find parking, I will usually get there five to ten minutes faster than they will. However, I would like a car because getting off of the peninsula is essentially not possible on a bike.

HCC: Have you always biked? How did you get started?

HA: I’ve always biked for leisure, like growing up with my parents. However, I did my undergraduate at McGill in Montreal and so I Bixi’d everywhere. I stayed there to work, and so I worked downtown and lived up in the Mile End. I would just Bixi to work every single day and it was, again, so much nicer than driving, which would take me twice as long, or taking the Metro, which is hot and stuffed and smelly, you know. Biking or walking is such a nice way to start your day. Especially biking because you don’t have any headphones in. It’s a bit meditative. So refreshing! Yeah, people who are stuck in traffic in their commute… I used to go down Agricola, and again, just flying by people who are sitting in traffic, and once I needed to cross North Street I would just get off and become a pedestrian to get across the street. It was great.

HCC: Where is your favorite place to bike in HRM?

HA: Unfortunately I think Halifax, for me, is more of a commuter biking city than a leisure biking city. Because the peninsula is so small, everything I do on the peninsula is commuting. I live in the North End, I go to school in the South End. I like to go on runs in Point Pleasant Park, but I live near Africville, so that’s essentially biking all of Halifax. Then I go to the mall sometimes, so like, then I get a little bit of the West End. To get off the peninsula, it honestly scares me. I find it so limiting with the highway systems. They haven’t created biking networks on those. Because I’m a confident biker, I know there’s people that complain about bike infrastructure on the peninsula, and I’m like, there’s always going to be a side street, you know? I used to take Robie, and then I started taking Vernon. I used to take Agricola, and then I just started taking Northwood Terrace. And you know, those don’t have bike paths but they are relaxed routes. And it’s funny because when they talk about building up bike lanes in places on the peninsula, I don’t think that’s the problem, I think it’s to get off the peninsula.

HCC: You recently had a near collision while riding on your bike. Could you tell me a little bit about what happened and what you think are the most pressing issues in Halifax in regards to safe cycling?

HA: I was using Google Maps, so I think that as we change bike networks, you can actually call Google, and I think it should be on everyone to do this. If you have a route, in Google Maps, you can click a button and suggest a better route. I was going to Bedford from the North End and it took me down this weird trail, almost as if it was taking me to the CN tracks, and then I got stuck there so I went back up. Then I was on the right side of the road overtop of Joseph Howe going towards the Bedford Highway. I could see there was a sidewalk on the other side of the street and it was telling me to cross. There were about eight lanes of traffic that it was telling me to cross without a stop light. So when I walked back up to the stop light, the stop light had no walk sign, like you couldn’t actually use it as a crosswalk. So then I was like, you know what, I can do it. So I got on my bike and started biking on the shoulder and, well I thought I could do it because I saw this guy, this older man biking, and I was like, oh he’s doing it, I can as well. I’m now biking towards where the Joseph Howe turn off is on the Bedford Highway and there was a big black semi-truck coming down right beside me and I think he was lacking space on his left side because I could see there was another car up front that was too close to his lane. He’s a semi-truck. So he was laying on his horn and I was right before the right turn to Joseph Howe, there’s a big patch of grass, and he was laying on his horn so I just bailed. By the sound of his horn it seemed like maybe he was going to hit me. I don’t know, but I was really really shooken up. I only had some grass stains and my chain was messed up. Other than that I was fine. But then I was just surrounded by traffic. I was on a grass island in the middle of all this traffic. So I probably sat there for a half hour to forty-five minutes just being like, okay, I don’t know how to get out of this. So I got back on my bike and started biking again and honestly, it was no longer rush hour so I had a bit more time I guess. Then when I saw a nice break in traffic I ran across the six lanes to the sidewalk because I couldn’t keep being on the non-sidewalk side, and unfortunately that’s unfair for pedestrians because there were pedestrians also. You have your bike so either you’re walking and you walk the whole way or you get on your bike and that’s really unfair to pedestrians. We become the cars to them. What cars are to us, we become to them, so that was my experience, and it was really scary and I will never go to Bedford again unless a friend drives me.

HCC: What do you think are the most pressing issues regarding safety of people on bikes? How do you think we could mitigate what happened to you?

HA: We need alternative routes to highways or even a big shoulder. We need a bike path for when you are trying to get off the peninsula. If there is anything I would want it would be safe bike routes to get to Bedford and Dartmouth. Dartmouth isn’t bad because of the bridge actually. The bridge is nice. The biggest issue with the bridge is actually getting on it. You have to go under and up and around. It just seems like a lot. There’s no signage! There’s a bus stop right there and I had to ask the people at the bus stop what to do. Even at that point they couldn’t properly direct me. So maybe that could be updated too. It would make getting to Dartmouth so much easier. So yeah, I’d say getting off the peninsula. Look at all the condos that are going up in Spryfield, what are those people going to do? A lot of those people don’t even have parking. A lot of them won’t have a car. There should be options for them.

HCC: Do you have any final comments or thoughts that you want to share?

HA: I think if we made biking safer, then people will choose to bike. How many times do you tell someone that you bike and they go “oh my gosh” like they think you’re like a brave soul.

This story is part of a series to increase the voice of the cycling community. Throughout these profiles, we will bring you the stories of the awesome people that make-up the backbone of the Halifax Cycling Coalition! If you know someone who deserves to be profiled, send an e-mail to contact@cyclehalifax.ca.