Halifax has not increased cycling numbers in 20 years 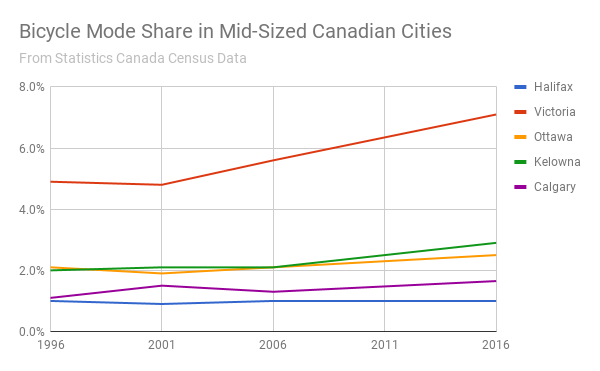 The 2016 Census data on  Journey to Work   that was released today is disappointing, but we were not surprised.

While other mid-sized cities across Canada are seeing a steady increase in the number of people cycling, Halifax haven’t seen any increase in cycling rates in 20 years.

The 2016 census data released today shows 1.1% of the population bikes to work as a primary mode of transportation, compared to 1.0% in 2006, 0.9% in 2001, and 1.0% in 1996. Despite our goal to double the proportion people biking to work by 2026 outlined in our 2014 active transportation plan and 2006 regional plan, Halifax has not made a major investment in bike lanes for people of all ages and abilities- and it shows. In our Active Transportation Plan (2014-2019), it’s advises building one protected pilot bike lane every year of the plan and this year will have missed even that objective.

Meanwhile, other mid-sized CMA’s such as Victoria, Calgary, Kelowna, and Ottawa have significantly expanded and upgraded their bike facilities since 2006. As a result, they have seen sizable growth in cycling numbers compared to previous years. Victoria experienced the most significant increase, from 5.6 percent in 2006 to 7.1 percent in 2016 of people using bicycles as a main form of transportation.

Today’s census results are just more evidence that proves if you do not build safe places for cycling, people will not bike.

Is it worth investing in cycling if only 1% of people bike?

A 2017 study from Simon Fraser University compared the impacts of bicycle infrastructure in mid-sized cities.  Their preliminary results found that 2/3 Halifax residents are “interested but are concerned” about riding a bike, and 86 % of Haligonians say they would feel “comfortable to very comfortable” riding a bike on a protected bicycle lane. 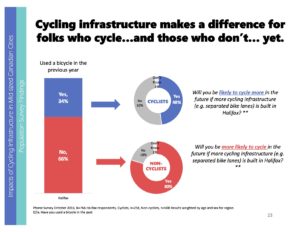 In Halifax, we only have 1.1 kilometers of protected bike lanes- one on Rainnie Drive, and the other on University Avenue. And they are not connected.

Add the census data to the long list of studies that proved if you build safe, connected and convenient bike lane, more people will bike. Only then we will be able to experience the economic, environmental, health, and equity benefits of people using sustainable transportation.

The silver lining in all of this is that change could be just around the corner. The Integrated Mobility Plan will be discussed by our councillors at Committee of the Whole on December 5th at 10:00am. In the proposal, we expect a network of bike lanes that will create a minimum grid throughout the downtown.

If you want to see more safe bicycles lanes and policies in HRM, call or e-mail your councillor (but calling is more effective), and let them know that you support a minimum grid of bike lanes. Then CC contact@cyclehalifax.ca and let us know how it went!