The Halifax Cycling Coalition is thrilled to announce that University Avenue is receiving a bike lane!

Construction will begin on August 28, 2016 for this exciting pilot project that will see a protected bicycle lane extend along both sides of University Avenue from the Killam Library on LeMarchant Street to Robie Street. The pilot project is a combined initiative between Dalhousie, Halifax Regional Muncipality, and the province. University Avenue is the first project to be carried out from the  regional bikeways plan and only the second protected bicycle lane in Halifax. Thanks to the community’s continued and active support for this project, this project was able to be realized and allowed us to take one step further toward building bicycle lanes for people of all ages and abilities. We hope this will serve as an example of what is possible and set precedence for a faster process for installing protected bike routes in the future. 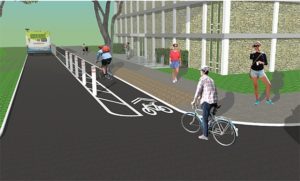 Image of proposed bike lane on South side of University Av.

Why University Ave?
University Avenue is an ideal location for a protected bicycle lane where many students and employees in the district live within kilometers of the University and Hospital. University Aevenue bike lane is part of the Urban Halifax District Bikeways Plan founded by Dalhousie, IWK, SMU, Capital Health and Halifax Regional Municipality. The partnership recognized that shifting the number of people who ride a bike as a form of transportation is key to improving the sustainability, health, and affordability of the region. A series of community-based planning sessions resulted in immense support for the plan that outlined a network of bicycle lanes connecting commuter destinations. 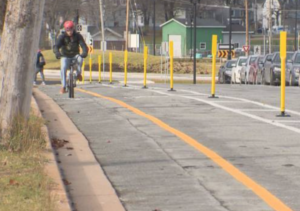 Why is a protected bicycle lane significant?
A protected bicycle provides a physical barrier between the line of traffic so thet people who are interested in trying cycling but have concerns about safety feel comfortable riding a bicycle. The installation of a protected bike lane can increase bicycle use anywhere from 21 to 171%, with about 10% of new riders drawn from other modes  (1). With the proper infrastructure, cycling has the potential to serve as one of the main modes of transportation in the region.