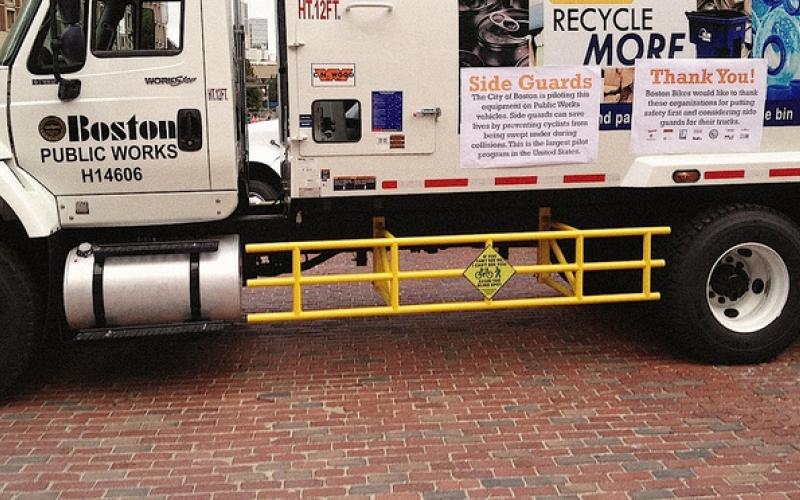 The Halifax Cycling Coalition is very pleased to announce that Halifax Regional Council has approved the staff recommendation for side guards on all city and contacted trucks. The installations will begin in 2017, with all city vehicles with new or retrofitted equipment by 2022. Side guards are an inexpensive piece of equipment that reduces the risk of death by up to 50% in collisions with heavy-goods trucks. This small change will have a huge impact in making it safer to ride a bicycle in Halifax.

Since 2007 there have been four fatalities caused by right-turning heavy vehicles without side guards.   In 2014 Dartmouth resident Johanna Dean was struck and killed by a right turning truck while riding her bicycle.  Her death could have been prevented by this life-saving piece of equipment.  Johanna’s sister Jackie Dean, who has been a fearless advocate for side guards  is relieved that the motion has passed knowing that this important decision  is crucial to increasing safety on the road for people who bicycle  prevent tragedies such as the collision that took Johanna’s life.

Thank you for everyone who helped make side guards a reality by contacting their municipal councillor, posting on social media and engaging in the discussion around side guards in Halifax.

Although we are please with council’s decision, the Halifax Cycling Coalition believes there is still more work to be done relating to side guards. The HCC will continue to urge the province and the federal government to follow Halifax’s example and install side guards on all new heavy-goods vehicles in Canada. We will continue to follow the issue closely,  and look forward to your continue support for the side guards on trucks.

Update: Staff recommend sideguards be installed on all city vehicles

We need your help to ensure that council approves this recommendation. Please take a moment to email or call your councillor to show your support. Please cc us on the email, campaigns@cyclehalifax.ca, or send us an email directly if you make a phone call, so that we can track who has been contacted. You can find your councillor’s contact information here.

We encourage anyone who is able to attend the Transportation Standing Committee meeting at 10am on Tuesday, June 14th to show support for this report.

The Halifax Cycling Coalition is disappointed that city staff have said no to live-saving truck side guards on city-owned and contracted vehicles. Truck side guards, which cover the gap between a truck’s front and rear wheels, have been shown in Europe to reduce the risk of serious injury or death when a pedestrian or cyclist is struck by a rear-turning vehicle. The United States National Transportation Safety Board, the Chief Coroner of Ontario, and countless road safety groups have called for the immediate requirement of side guards on all heavy trucks in North America. 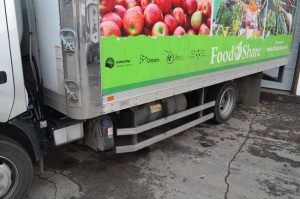 Side guard on a delivery truck in Toronto. Source: Treehugger

Unfortunately, staff have recommended that Halifax not install this life-saving equipment on its trucks, something which could have prevented the death of Johanna Dean in Dartmouth in 2014, Jaclyn Hennessey in Halifax in 2008, Michael Brooker in Halifax in 2007, Corey Mock in Halifax in 2001, saved Elizabeth Foston’s legs in Dartmouth in 2014, and, if information from other jurisdictions is to be believed, several more deaths and serious injuries in the past decade. While only Mr. Mock’s death and Mrs. Foston’s maiming involved vehicles under the HRM’s control, we believe that as the managers of the largest vehicle fleet in the city, the HRM should take a leadership role on road safety.

Please take a moment to contact the councillors on the Transportation Standing Committee by clicking here, or emailing clerks@halifax.ca and cc’ing campaigns@cyclehalifax.ca. Tell the councillors why you support affordable life-saving truck side guards on all city-owned and city-contracted trucks.

What evidence exists for truck side guards?

Staff have rejected a proven, cost-effective way to reduce serious injuries and deaths on our streets based on one flawed report by Transport Canada. A simple Google search will tell you that this study was on its way to confirming the benefits proven by every other jurisdiction that has looked at side guards. Transport Canada’s assertions otherwise were debunked by the Globe and Mail, who uncovered the scrapped report which found that side guards showed promising safety improvements in Transport Canada’s testing. The Globe goes on to show that the report was likely scrapped for political reasons due to complaints from the trucking industry. We are disappointed that staff included this report without providing that key piece of context.

In addition to this, staff did not, as asked, investigate the possibility of installing side guards on a go-forward basis. Including side guards on new trucks and in future contracts with service providers gives the city an opportunity to spread this already-affordable expenditure over a number of years, as was done in Boston and Montreal.

Side guards help reduce the severity of the most common type of fatal collision for people on bicycles, and one of the top types of collision for people who are walking. Studies show that at least 25%, and as many as 50% of cyclists who are killed were run over by a right-turning truck. Sideguards have been shown to increase the chance that those collisions result in serious injury – not death. If side guards had been installed on the city’s garbage trucks it’s possible Elizabeth Foston would still have the use of her legs, and it’s likely Corey Mock would still be able to have dinner with his family. These collisions will continue to happen, and you have the power to reduce the damage they cause.

Even if, as staff say, side guards are just one of many factors that contribute to reduced serious injuries and deaths, should we walk away until we have the perfect solution? A completely barrier-protected network of bicycle lanes is years, likely decades away from completion. In the mean time, there is a risk of collision, a type of collision that has killed several residents of the HRM in recent years. Side guards have been shown elsewhere to play an important role in reducing the risk of death when a collision occurs between a truck and a vulnerable road user.

We believe the credible evidence from the Volpe Centre in Washington, the Chief Coroner of Ontario, Transport for London, and other groups around the world, who all concluded that side guards save lives. We are calling on Halifax council to reject the staff recommendation and ensure side guards are installed on every new vehicle purchased by Halifax or its contractors, joining Montreal, Boston, Cambridge, Portland, and New York on the forefront of vehicle safety in North America. Wouldn’t that be bold?

Please take a moment to share your thoughts with the councillors on the Transportation Standing Committee by clicking here, or emailing clerks@halifax.ca and cc’ing campaigns@cyclehalifax.ca. Tell the councillors why you support affordable life-saving truck side guards on all city-owned and city-contracted trucks.