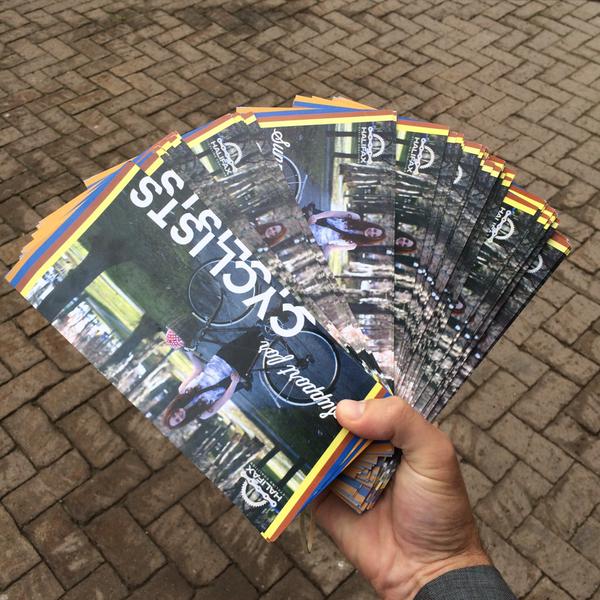 Summer is in full swing now and there are more people riding bicycles on Halifax’s roads than ever before! These voices are being heard here in Halifax as several hundred postcards were delivered to Mayor Savage today, demanding action to make Halifax’s roads safer for everyone.

While the sun is shining and the weather is warm, more people want to leave their cars at home and get out on their bicycles. Young or old, summertime is the season to ride. Whether it’s to the park, or getting exercise on the way to work, what better way to encourage summer fun than to make riding a bicycle around town safer and easier.

The Halifax Cycling Coalition is working hard to make riding in Halifax better. By collecting these letters and delivering them to Mayor Savage, we hope to see some real progress on making this city a safer place to ride. These postcard signees aren’t the only ones who will benefit, though. Active transportation infrastructure will make everyone’s summer more enjoyable. From cleaner air to healthier bodies, from fewer collisions to more money in the bank, improved active transportation infrastructure works to make a city more inviting, calm, fun, and liveable. Isn’t that what summer’s all about?

Mayor Savage was very receptive to our On Track for 2020 report. He understands the need to build bicycle infrastructure in order to make our population healthier, our air cleaner, and save money for all taxpayers. Bicycles achieve all three of these things, which is why he committed to building more bicycle lanes and fixing the Macdonald Bridge bicycle lane as part of his Conversation on Healthy Communities.

As the city’s first protected bicycle lanes appear on University Avenue later this summer ridership will only increase this year and that means even more postcards for Mayor Savage next year. By 2020, hopefully we’ll be able to send those postcards to friends – rather than politicians – to show them what an awesome time we’re having bicycling safely around our beautiful city!