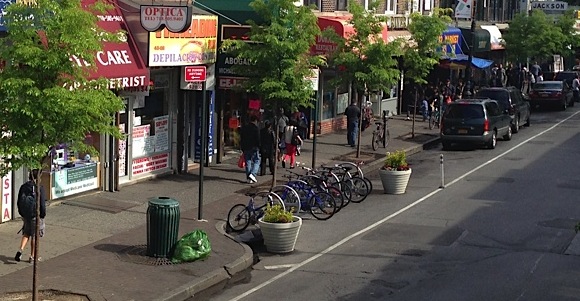 Join us for the 2015 participatory budgeting sessions being held by Waye Mason and Jennifer Watts. Have your say on how district capital funds are spent! This is the process we used to install the first two of eight bike repair stands now found throughout Halifax. This year we need your support to implement attractive, convenient bicycle parking options in some of the most popular bicycle corridors in Halifax. In order to participate you must be a resident of the district in question.

The participatory budgeting session for District 7 will take place on Tuesday, May 19th, 2015 from 6-9pm in the Lindsay Children’s room at the Halifax Central Library.

At this session we are requesting up to $15,695 to install seating, bicycle parking, and trash cans in the median of University Avenue to complement the University Avenue protected bike lane. This will provide a great space for picnics or to sit and have a coffee for people travelling through the area. Additionally it will increase the already-crowded bicycle parking at Dalhousie University.

The participatory budgeting session for District 8 will take place on Thursday, June 4th, 2015 from 6-9pm at the Italian Cultural Centre on Agricola Street.

At this sessions we are requesting up to $7,107 to install an on-street bike corral for up to 16 bikes, replacing space currently occupied by just two cars. The North End has seen a massive surge in bicycle use in recent years and it is nearly impossible to find bicycle parking in some areas. We are working with the North End Business Association to find the best location for this corral, which will consist of four concrete planters, eight bicycle racks, and a multi-stream garbage can to allow you to dispose of your apple cores, disposable coffee cups, and takeout containers before you ride. This bicycle corral is removable, so the city will be able to pull it out in November and replace it in April. The photo at the top of the page shows what a beautiful bicycle corral in Jackson Heights, Queens, New York looks like.