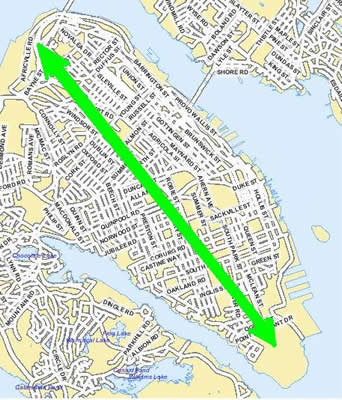 Attention HCC Membership and Concerned Residents,
As many of you know the Halifax Cycling Coalition (HCC) has been part of a groundswell of community support for a Crosstown Connector cycling route to connect the North of the Peninsula to the South. This position was originally made clear after the HCC worked with many residents in the community to submit a petition to City Hall in summer 2010. This petition signed by close to 1500 people forced HRM to take notice as Council directed staff to explore a North-South cycling route.
Today, almost three years later, the Active Transportation Committee has supported this proposal. The committee has passed a motion requesting HRM proceed with both the  Windsor/Vernon/Seymour route and the Agricola route. We see this as a big win for cycling moving forward. However it is critical that HCC members, other cyclists, and HRM residents continue to show support for this idea as it moves toward Regional Council for the final decision. HCC sees both routes as adding value to a cycling network as they serve different neighborhoods and functions. This is the first real action on the peninsula since the Active Transportation Plan was adopted in 2006.
We encourage you to write your councillor if you support the HCC in its view that Agricola corridor is a key bicycle route that should be formally recognized to improve biking conditions and create a more livable Halifax. We will keep you posted on next steps as we continue to advocate for the route that could have the greatest impact on biking in the HRM in the coming years.
Sincerely,
HCC Board of Directors
For more background please review the various documents prepared by the HCC on the Crosstown Connector.
Bike Week Discounts/Specials for HCC Members
Bike Week Discounts for Cyclists
Tags: Crosstown Connector, HCC Board, Take Action